[U.S. Treasury Bonds have been in a bull market for 35 years as interest rates have fallen from a high of nearly 15% in 1981.  Investors who have stuck with long-term U.S. debt have reaped very substantial capital gains as a result. But with yields on the 30-year at a current 2.63%, how much lower can they go?  Our friend Doug Behnfield, a Colorado-based financial adviser whose thoughts have been featured here many times before, believes there is still room for further gains. He explains why below in a letter to his clients that focused on two of his favorite investment vehicles: closed-end municipal bond funds and long-term zero-coupon bonds. This is must reading for anyone eager to understand how these vehicles work. For our part, we see long-term U.S. rates falling over the next 2-3 years to an epochal low of 1.64%. If this comes to pass, holders of long-term Treasury debt will do very well indeed. RA]

‘Thoughts on Duration’. How is that for an intriguing title? One purpose of this comment is to attempt to explain how bonds work so that you can understand what causes the bond price to change when interest rates go up or down if you don’t already. Another purpose is to explain how closed-end municipal bond funds and zero coupon bonds (Strips) work because they represent the vast majority of fixed income exposure in your portfolio. It is likely that we are entering the final phase of “The Great Bull Market in Bonds” that began 35 years ago. If that is the case, our asset allocation can be expected to change dramatically over the next couple of years. As interest rates approach a low enough level that finally makes the risk/reward equation for long-duration bonds substantially less appealing, our focus is bound to change. Hopefully, that makes this topic more interesting.

Bond duration is a financial term that refers to how long it takes to get your original investment back via distributions. One really important thing about duration is that it is also a measure that is used to determine how much a particular bond or bond fund will change in price for a given change in market interest rates. Very few people understand that. The longer the duration, the more price sensitivity the bond has to interest rate movements. It is complicated enough that most investors just throw up their hands when faced with the term.

What makes duration so critical is that (particularly for people living on interest income) it measures the amount of time you have locked in rates. The most common advice from the Financial Services Industry on choosing the appropriate maturities for a bond portfolio has tended toward an allocation that has proven to be way too short-term. It has been a contrarian’s dream. Rather than the popular view that long duration bonds should be avoided because of “interest rate risk”, the reality has actually turned out to be that long-term bonds have provided “interest rate reward”! Not only have long duration bonds locked in the higher rates of the past, they have also provided capital appreciation. Bond investors have been well advised to stick with as much duration as possible ever since the yield on 30 year Treasury bonds hit 15.25% back in 1981. (See chart below) 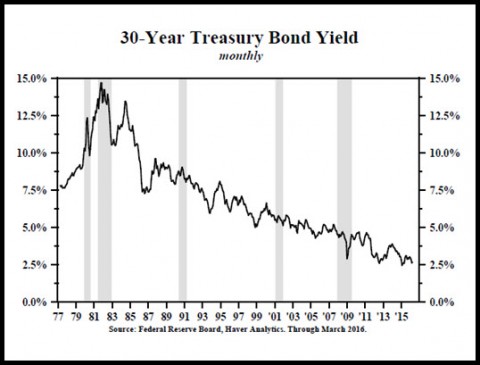 Closed-end municipal bond funds and long-term zero-coupon bonds are two of the longest duration fixed income vehicles available and because of that, they have been among the best performers. Because they are so long-duration, they have gone up more in price than bonds of shorter maturity.

Closed-end municipal funds differ in many ways from open-ended municipal funds and individual municipal bonds. They are called “closed end” because this type of fund raises money during an initial public offering and after that, investors cannot add or remove assets directly from the fund. The fund managers retain the initial amount raised, say, $1 billion, and they only make income and capital gains distributions to shareholders. Because they do not accept subscriptions or redemptions, investors must buy or sell shares of the fund in an arms-length transaction on a stock exchange when they want get in or out. There are a number of significant advantages and disadvantages to this structure:

A good example of a 0% coupon bond is an old-fashioned U.S. Savings bond. Remember those? Your grandmother would buy you a $100 Savings bond shortly after you were born that came due when you turned 20. Back in the good old days, they paid about 6% so Grandma only had to spend about $30. That’s because $30 invested at 6% compounded semi-annually grows to $100 in 20 years. (See graph.) 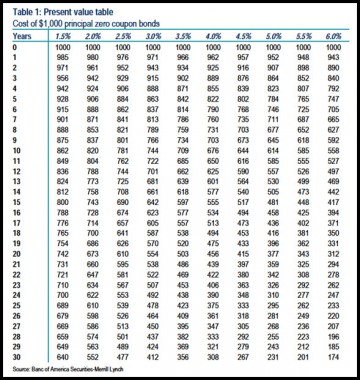 This graph means a lot to me. Stan Salvigsen published the first one I ever saw in 1982 when long-term Treasury bonds were yielding about 14%. Back then the scale for yield (horizontal axis) went from 16% down to 8%. Ah, those were the days! Merrill Lynch had just created a product called a Treasury Investment Growth Receipt (TIGR), which was a synthetic 0% coupon Treasury bond. What they did was buy a bunch of 30-year Treasury bonds, put them in a trust, and separately register the coupon and principal payments. By 1986, the U.S. Treasury began issuing these separate future interest and principal payments in response to the enormous demand, particularly from pension funds. As it turned out, Treasury Strips became the benchmark investment vehicle for funding actuarial liabilities. It is the only bond investment where you know exactly how much money your original investment will be worth 20 or 30 years down the road.

A Lock on Rates

The graph above tells you how much you will earn in total if you receive a specific rate of interest, including an assumption that the rate compounds semi-annually for a specific number of years. When you own a long-term coupon-paying bond, you have no idea what your total return will be because the rate that each of your coupons reinvest at is unknown. To reiterate; a 0% coupon bond not only locks in a rate of interest on your initial investment; it also locks in the reinvestment rate on each of the coupons that you would normally be receiving every six months. Because the coupons on a conventional long-term bond can represent an even larger amount of money than the original investment, the reinvestment rate is a major unknown input in total return. As a result of locking in the reinvestment rate, 0% coupon bonds have a much longer duration than normal coupon-paying bonds and so they change in price in the secondary market much more in response to changes in interest rates.

In the 2 years ending March 19, the November 2043 0% coupon Treasury bond (Strip) had a total return of 38.7% ($338 to $469) because rates declined from about 3.5% to just under 2.6% on 30-year Treasury bonds.  The July 2049 San Diego School District G.O. 0% Coupon municipal bond is up 70.6% in the last 2 years ($167 to $285) because rates dropped from 5.4% to 3.82%.  These bonds are very long term and the perception of credit risk has declined in municipal bonds in general and California in particular. In the same two years, the UBS Universe of leveraged closed-end municipal bond funds had a total return (exclusive of dividend reinvestment) of 26.3% and that was attributable both to declining interest rates and a narrowing of the discounts to NAV.  Our favorite closed-end municipal funds still have a current yield right around 6%.  Keep in mind that the interest portion of the closed-end municipal funds and that of the 0% coupon CA municipals are Federally tax-exempt, whereas the interest portion of the Treasury Strip return is state tax-exempt. Those numbers are fairly exciting (even if this whole commentary is somewhat tedious). 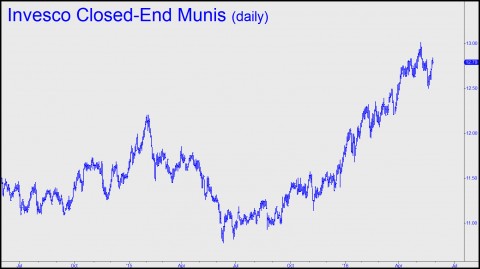 What is most important is the outlook for rates going forward, and there are several factors suggesting that “The Great Bull Market in Bonds” can continue for another couple of years.

All of these conditions suggest lower rates on the highest quality government bonds going forward.