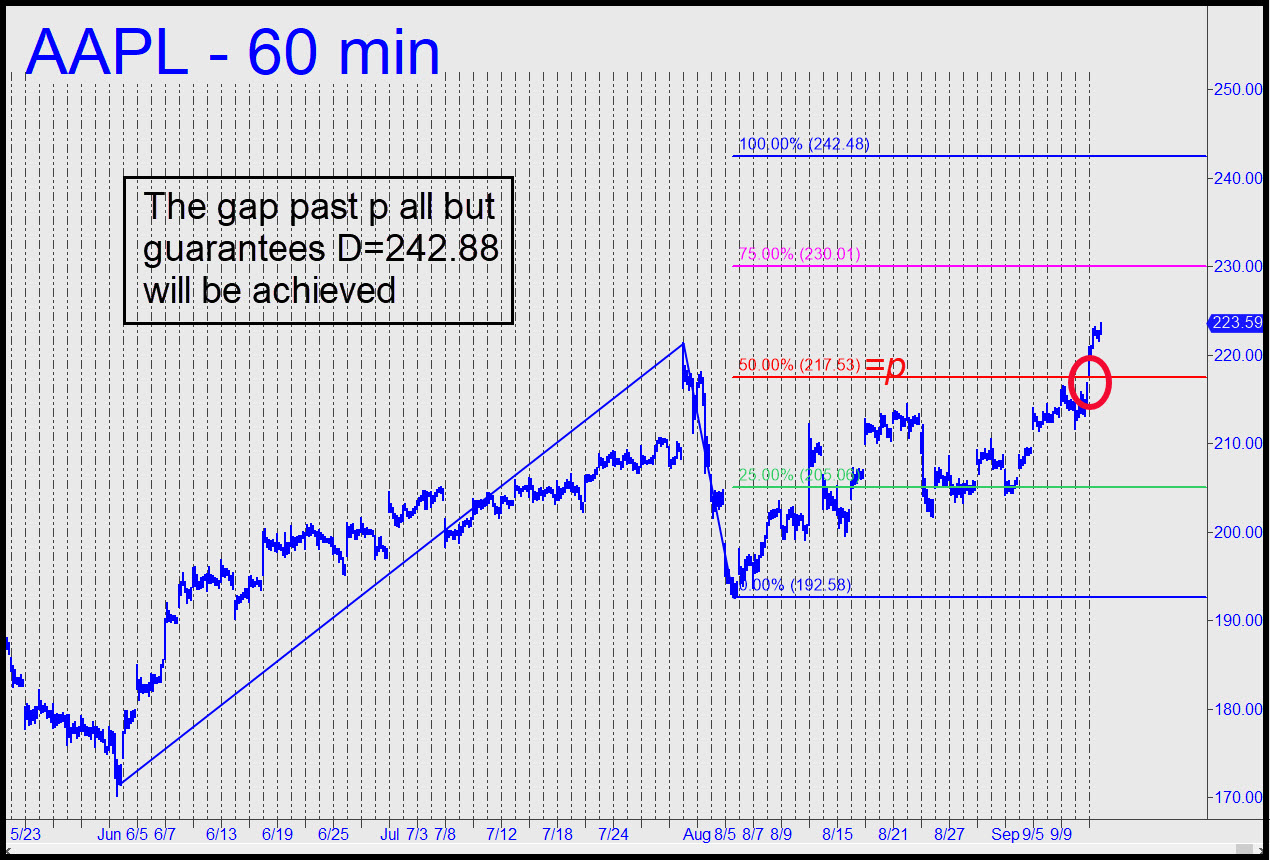 Judging from the way AAPL gapped through the 217.63 ‘hidden’ resistance shown in the chart, the stock seems all but certain to achieve a 242.48 rally target derived from the same pattern. This implies the broad averages are about to move sharply higher as well and that any ideas we might have harbored about stockpiling put options should be put on hold, at least for the time being.  The rally would equate to a gain of about 8.5% in the value of Apple shares. If the Dow were to move up only half as strongly, it would be sitting at 28,290, exactly 1153 points above current levels.

The bullish technical picture is at odds with data suggesting the global economy is slipping into a recession or worse. Housing and autos have peaked in the U.S., and so, probably, have corporate earnings. To make matters worse, share buybacks have tapered off as surplus funds repatriated to the U.S. under Trump’s favorable tax rules have dried up.  It is natural to want to load up on puts under the circumstances. However, given Apple’s bellwether status, the chart is telling stock-market bears to be patient.

Hold Off on Bullion

And gold bulls as well. A resurgent bull market is certain to put bullion and mining shares under pressure, interrupting the powerful rally begun late in May. They have held up well so far and on Tuesday even gained some ground with the Dow up 227 points. This is a very bullish sign, and it provide reason to think the precious metals sector will hang tough if there’s a blowoff coming in the stock market. However, if you plan to buy bullion aggressively, you may get better prices by waiting for 2-3 weeks. ______ UPDATE (Sep 17, 6:17 p.m.):  My immediate outlook is still quite bullish, but we are monitoring the stock’s vital signs closely because of the drubbing it took last week. This chart shows a rally pattern smaller than the one projecting to 242.48, with a feeble uptrend that has triggered a theoretical buy signal at x=220.33 and minimum implied upside to p=223.65. If AAPL is going to get to 242.48, or even to the 230.27 target of the smaller pattern, it will need to push past 223.65 with little strain. _______ UPDATE (Sep 19, 5:34 p.m.): No surprise here: The rally reversed from 223.76, just 11 cents from the Hidden Pivot resistance I’d noted above. If as expected AAPL blows past, look for a further run-up to at least 230.27. You can short there aggressively if you’ve caught a profitable piece of the ride north. _______ UPDATE (Sep 22, 12:04 p.m.): The 223.76 target I’d provided above came within 11 cents of nailing last week’s high.  A $6 selloff ensued, but there were no reports in the Trading Room of anyone having used the target to get short. We’ll back away for now, since it’s anyone’s guess where AAPL’s canny handlers will take it next. The 242.48 rally target remains viable nonetheless. _______ UPDATE (Oct 3, 8:43 p.m.): Just one small change: a slight upward revision in the target to 243.68. One of the coordinates used to determine the original target was a hair off.