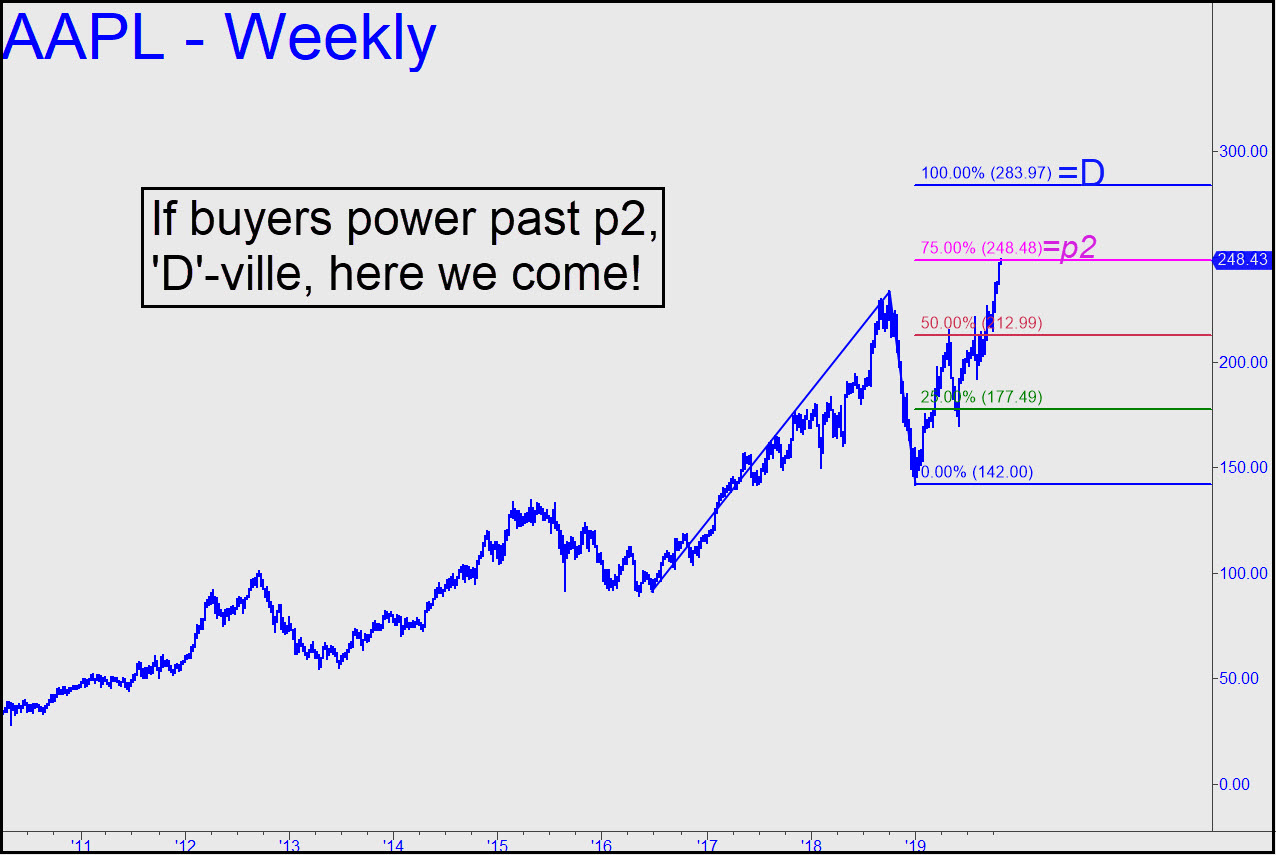 To repeat: AAPL is the only stock we need follow closely to know whether a major top looms for the bull market. The logic is simple: Because Apple is the most valuable company in the world, its shares top institutional investors’ must-own list. Furthermore, as long as those who make their living throwing Other People’s Money at a dozen or so stocks continue to throw the lion’s share of it at AAPL, the bull market is all but certain to continue.  It is not so much a case of AAPL dragging the broad averages higher as dragging the institutional sheeples’ brains into thin air.

So what are we to infer from the chart show in the inset?  Very simply this: If the stock were to blow past the pink line, a secondary Hidden Pivot’ at 248.48, it would strongly imply more upside to at least 283.97, the pattern’s ‘D’ target. That’s 14% above these levels, which would mean 30,951 (or so) for the Dow Industrials.  If this were to occur between now and early next year, it would be a fitting blowoff for the biggest U.S. bull market of them all. Keep in mind that your editor can think of a dozen good reasons why the Dow should be selling for half its current price. Better that you should get bullish advice from a permabear who can read charts than from some buy-side fanatic who believes current price earnings multiples alone justify significantly higher prices. ______ UPDATE (Oct 29, 12:02): The stock is getting drubbed after poking its snout slightly above the 248.48 ‘hidden’ resistance on a bull-trap opening. For all we know, the high could endure for the next ten years. Although I doubt it, we needn’t concern ourselves with AAPL until such time as it does what we need it to do: close for two consecutive weeks above 248.48. ______ UPDATE (Oct 30, 8:46 p.m.): DaBoyz have leveraged earnings news out after the close to goose AAPL well above the 248.48 pivot. Say hello to 283.97, since odds of AAPL’s getting there increased significantly with this evening’s short-squeeze. Today’s commentary, Wafting Into Thin Air, has more to say about this. ______ UPDATE (Nov 5, 6:05 a.m.): Although I like the 283.97 rally target, I’m not married to it. Actually, if AAPL were to fall to the green line shown in this chart, that would trigger an rABC short’ to at least 253.92. _______ UPDATE (Nov 6, 11:18 p.m.): The short trade survived, although the rally into the close threatened to stop it out. If so, that would reaffirm the likelihood of a run-up to 283.97. _______ UPDATE (Nov 7, 11:01 p.m.): AAPL gapped above the stop on the opening bar, reaffirming its status as King Kong of  the securities world. The stock would need to fall to 252.42 to even slightly damage the hourly chart.