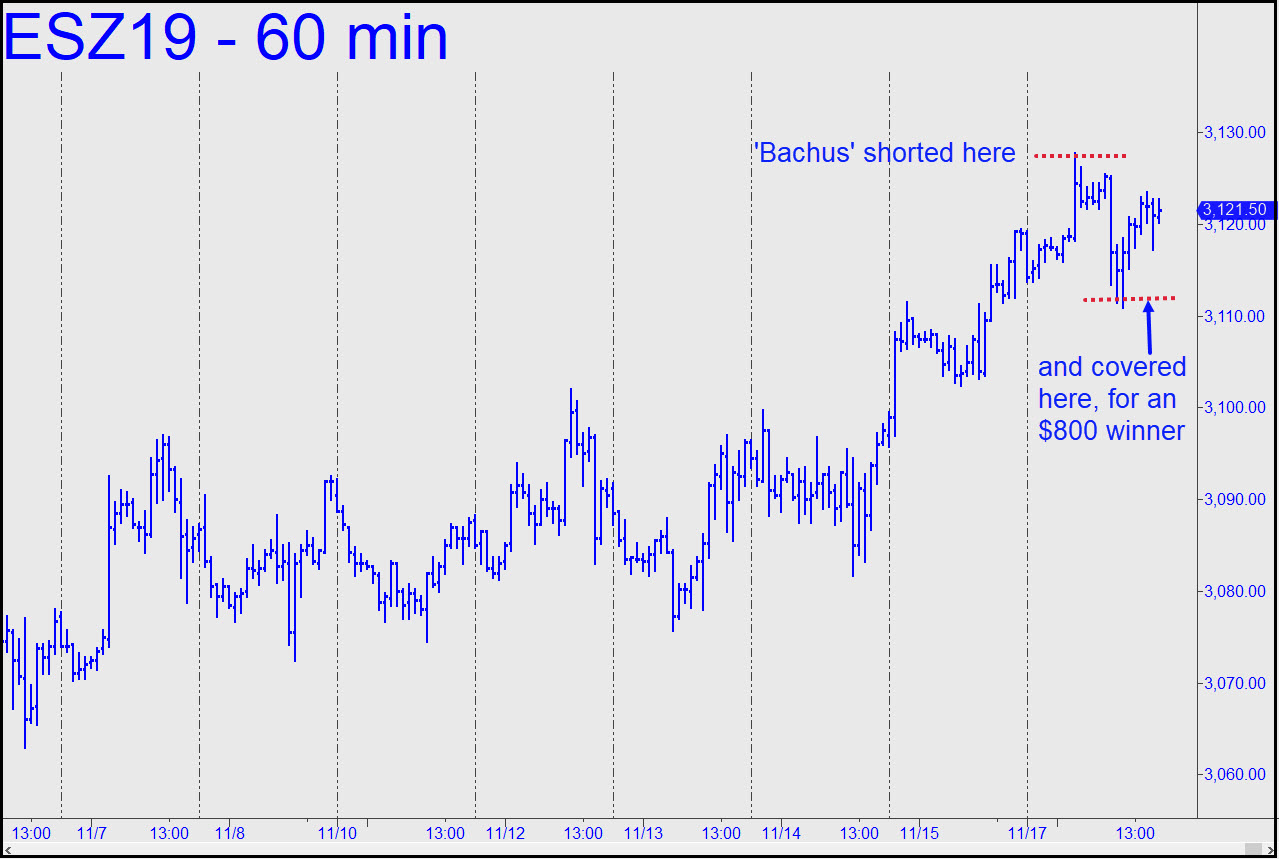 The futures topped three ticks from a Hidden Pivot target I’d been drum-rolling here for nearly two weeks. ‘Drum-rolling’ would be an understatement, actually, since it was more like a public relations campaign to drive subscribers’ attention to a trade that promised to effortlessly produce a low-risk winner. And so it did, even if only one subscribers — ‘Bachus’ in the chat room — reported taking action. Bachus has a very impressive track record — not only for turning my price targets into quick cash, but for doing so with enough street smarts and brio to improve on what I’ve advised. Also, he often shares winning trades in a timely manner that would allow anyone in the room to follow his lead. In this case, Bachus used a corrective ABC pattern of his own to exit the position, covering the short (or at least a portion of it) exactly 1.00 point off the intraday low. Nice shootin’, dude! The trade was worth $800, and it was as close to a sure thing as any you will find on the daily list of touts. If you did the trade, please do mention it in the chat room. I’ve marked it as “Open” for purposes of establishing a tracking position — that’s what that little plus sign (+) next to the symbol ESZ19 means — but if no one else actually did the trade, it will be removed. If you passed it up in hopes of shorting my DIA target with put options, you’re on your own, since no one in the Trading Room expressed any interest in the symbol.

Despite today’s bullseye, the question remains as to whether the 3128.50 target caught a major top. This was a logical place for one to occur, and that’s why anyone who got short there should have kept at least 25% of the original position for a swing at the fences. The futures recovered most of a 17-point correction by day’s end and looked eager for more, as they nearly always do these days. But so what. Our goal is not to nail the Mother of All Tops, lovely as that would be, but to make money trading the swings.  Most immediately, even if the futures were to push above today’s high as the week unfolds, I strongly doubt they’re capable of another significant rally without a nasty correction first. The 3128.50 pivot, as well as a major trendline that I wrote about here earlier, look too daunting to give way easily. I’d be astounded if the resistances gets trashed, but we should nonetheless be prepared for it. If buyers explode and take this gas-bag significantly higher by Friday, I’d resign myself to more of the madness that has gripped Wall Street. Perhaps this bull really IS unstoppable? Maybe things really ARE different this time. Nahhhhh! _______ UPDATE (Nov 19, 8:31 p.m.): Today’s gratuitous blip above Monday’s high has not brightened my short-term outlook, although a two-day close above it would. Incidentally, no one even mentioned the DIA short I’d recommended using a 280.88 rally target, so I have not established a tracking position. DIA topped on the opening bar just 0.04 points from the target before plummeting to 278.87, the equivalent of 200 Dow points. Near-the-money puts more than doubled. _______ UPDATE (Nov 20, 9:03 p.m.): This sack of delusions was getting pounded in after-hours trading, apparently bound for the 3082.00 target shown. Notice that this Hidden Pivot would make a lovely point ‘C’ low in relation to the 3081.75 bottom recorded on 11/14. To leverage the tradeable bounce we might expect, I recommend using an rABC set-up, where A=3090.75  (11/20 at 2:00 p.m.). _______ UPDATE (Nov 21, 10:13 p.m.): Sellers, especially the short kind, are evidently too tired of getting ambushed by trade-talk spin to be much help at the moment. Perhaps a smidgen of forgetfulness will help them regain their courage over the weekend. If so, expect the S&Ps to take the path of least resistance next week — i.e., lower.