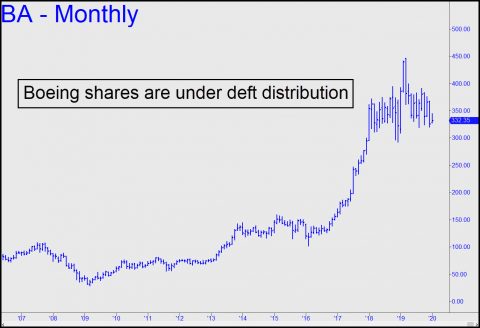 Boeing shares were up more than $5 at one point Tuesday, ostensibly on news that orders had fallen to a 16-year low. Go figure. The dearth of new business is a predictable result of the global grounding of the best-selling 737 MAX following two collisions that killed 346. Lately, there has been a non-stop onslaught of bad press that will blacken the company’s reputation for years or even decades. Just last week, internal memos surfaced that showed Boeing to have been recklessly irresponsible for downplaying the need for simulator training to familiarize pilots with the MAX’s automated flight-control system. Moreover, a Congressional inquiry revealed, according to a report in the Wall Street Journal, that “the apparent pressure to save money and make the MAX more marketable to airline customers without upfront simulator training didn’t come from individual employees, [but from] high up in the Boeing corporation.” A week earlier, Boeing reportedly increased its reserves by $5 billion to handle legal fallout from the MAX crashes.

That’s not exactly what investors want to hear. And yet, preternaturally strong hands have so far managed to hold the stock above lows near $320 recorded last October, after the second crash. This has been possible in part because sales of other aircraft, including 787s and wide-body 777s, have remained relatively robust. Boeing has lost considerable ground to archrival Airbus nevertheless, and it is still uncertain when the MAX will fly again. It has been no small feat under such duress for the institutional investors with whom Boeing shares reside to plump them for distribution. But who would be the buyers? Certainly not widows and pensioners, since the stock sells for more than $300 a share.  Whoever steps in, it seems likely that BA will trade for significantly less before the company has extricated itself from the MAX morass. Don’t be fooled in the meantime when BA rallies spectacularly now and then, as it will. This tends to happen no matter how grim the outlook for a giant company that happens to be over-owned by institutions.  DaBoyz will take their time before they pull the plug, enforcing an omerta that would ostracize any institutional seller who breaks ranks. The same was true of GE, which took nearly a decade to fall from $58 to a still unsurpassed low at $5 in 2009. An intervening rally that peaked at $32 in 2016 might have suckered the rubes, but the stock has since relapsed to a low in December of 6.40. Caveat emptor.