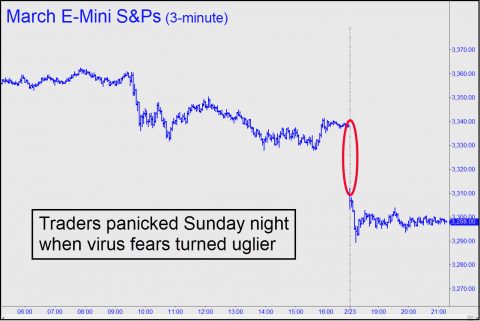 Now that we are hearing stories about the viral threat of superspreaders, of deepening economic paralysis around the world, and how it could take 18 months to produce a vaccine, investors’ show of bravado in recent weeks seems to have melted away. Shares got hit across-the-board on Thursday and Friday, and if investors know what’s good for them they’ll pound the bejeezus out of them this week. Although it’s difficult to estimate how much selling will be necessary to discount some worst-case possibilities, including a sharp global downturn, it was at least a step in the right direction for traders to belatedly acknowledge with the hesitant, two-day selloff that they simply don’t know how things will play out. It is frequently said of investors that they fear uncertainty more than anything else, and so the weakness that ended the week would have been a comfort to those who have wondered when even a faint sign of rationality would emerge on Wall Street.

Looking just ahead, a third consecutive day of selling would be extremely rare and suggest that investor psychology may have shifted after being fearlessly bullish for most of the last 11 years. As always, we’ll be watching AAPL in particular, since it is the key bellwether for discerning the mindset of the institutional investors who literally own the game. Warren Buffett is conspicuously among them. Berkshire Hathaway reportedly holds $78 billion worth of Apple shares, about twice what the investment firm paid for them, and Buffett is not the sort who is likely to cut and run just because a global economic slowdown threatens. His steady nerves are what permabears will be up against if they expect the stock market to simply fall apart. Think of Boeing, which hasn’t had a single good-news day in a year. Despite this, BA, which traded as high as $446, hasn’t been able to break below $300 after 11 months of trying by increasingly enfeebled sellers. If bulls are indeed heedless, and if the torrent of Other People’s Money that has powered the bull is in fact limitless, stocks should be on their way higher by week’s end.