How the Fed’s $6 Trillion Giveaway Could Backfire Catastrophically 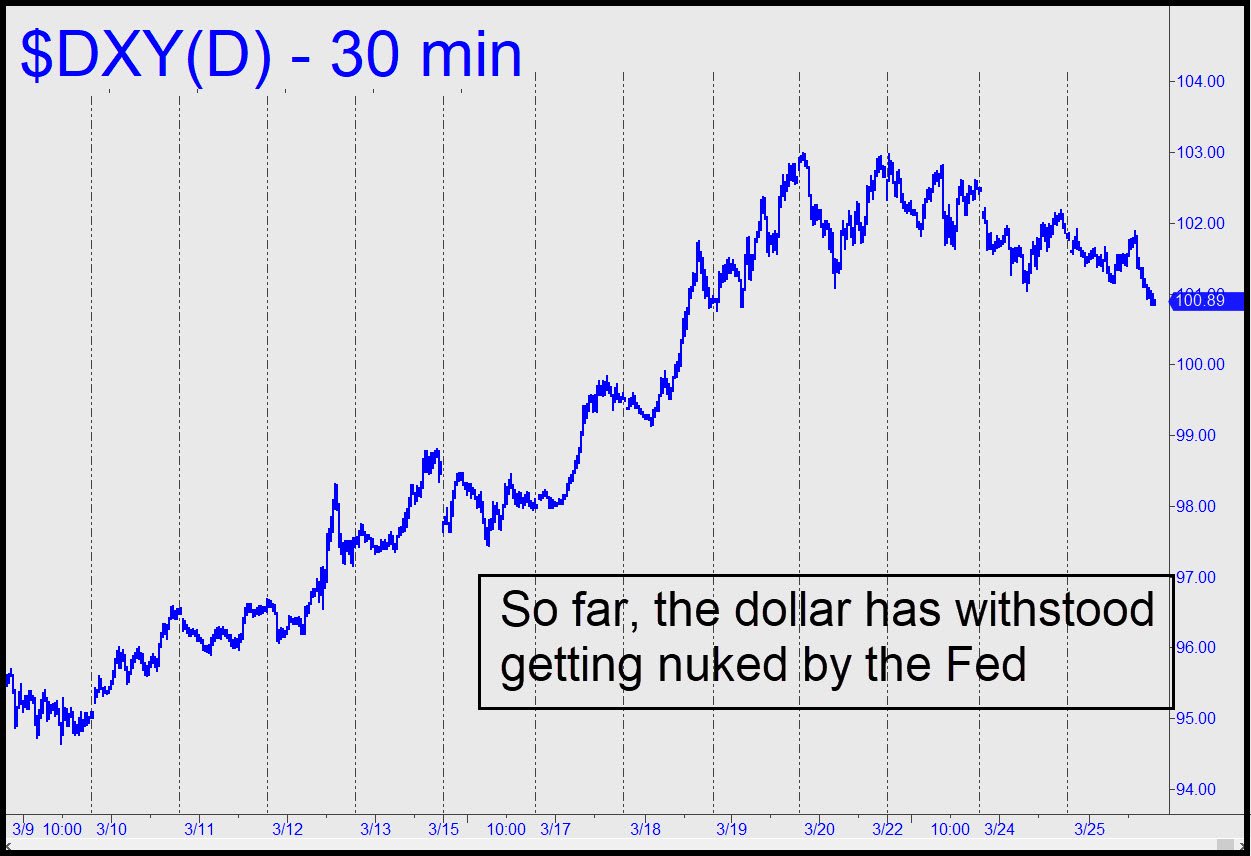 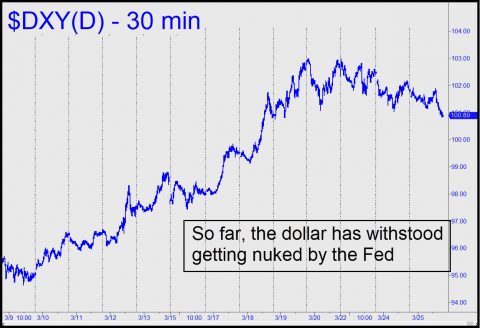 The U.S. dollar took a massive hit in stride following last week’s announcement of a $6 trillion bailout package. The news caused the greenback as measured by the Dollar Index (DXY) to fall by just a few points from recent highs. The dollar’s seemingly inexplicable strength is a harbinger of the catastrophic debt deflation I’ve been warning about for many years, since it will increase the real burden of debt on all who owe dollars.  It also shows how the dollar can be subject to short-covering pressure capable of pushing its value far above any logical threshold, even when the Fed is practically giving away dollars to the rest of the world.

Let me explain. At present, exceptionally strong demand for dollars is being driven in significant part by liquidity issues originating in Japanese financial markets. Like all central banks, the Bank of Japan has usurped the role of debt markets in order to create a nearly unlimited supply of money to prop up the economy. One way it force-feeds yen into the system is by buying Japanese government bonds held by dealers. Dealers have been reluctant to sell lately, however, because they need the bonds to collateralize short-term borrowing in U.S. repo markets. They are more eager than ever to borrow dollars because the Fed has made them so cheap.

The Fed’s intention in backstopping global markets with an effective $4 trillion credit line, in addition to a $2 trillion consumer stimulus, was to avoid a run on financial markets. Instead, the banksters may be about to discover that they have stimulated infinite demand for U.S. dollars. I once wrote about this in the context of my experience as a floor trader. One might think that if, say, IBM shares were trading in 50,000-share blocks, that a million-share offer from out-of-the-blue would overwhelm bids and depress the stock. In fact the opposite held true: As soon as the huge offer was “advertised” on trading screens around the world, arbitrageurs would figure out ways to make use of it, often by shorting call options or buying puts as hedges. Like piranha, they would nibble at the offer at first, until the smell of blood attracted enough feeders to pick the carcass clean in a frenzy.

Opportunity moves to size, as traders say. Unfortunately, the Fed may soon discover how this applies to dollars now that the banksters have stimulated effectively unlimited demand for them.  [A debt of thanks to ZeroHedge for stimulating my thoughts with this article. RA] _______ UPDATE (March 26, 8:10 p.m.): Sellers accelerated the tempo of the dollar’s recent decline, but I still expect it to be short-lived. The next rally will be linked to troubles in global financial markets that have been building for years.  They are not going away any time soon.