Will You Be Ready for the Mother of All Rebounds? 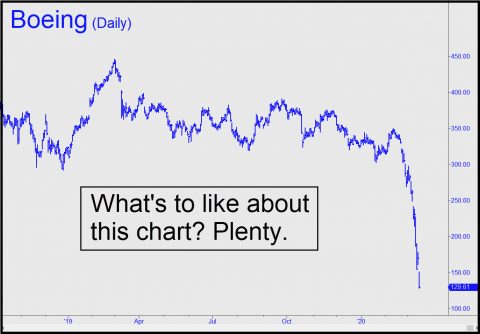 [Note: This commentary now strikes me as having been w-a-a-a-y too bullish. Some important things have changed since I published it. For one, the $1 trillion+ stimulus package is already a transparent failure — not just psychologically, but of political leadership. Does anyone — other than eggheads and some politicians — actually think it will stimulate anything? Absolutely not. And there is this: Spring-break revelers have introduced grave uncertainties that will persist for at least another four to six weeks, until we can be sure they have not jump-started a contagion that the nation has paid an extremely high price to suppress. The stock market cannot possibly sustain a rally under the weight of such anxieties. RA]

If you’re feeling depressed because your retirement fund has been cut in half by the Covid-19 avalanche on Wall Street, take heart because you may have a good chance to get it back. Yeah, I know, I wrote here only last week that the bear market would stretch on for years, bankrupting us all and ushering in the Second Great Depression. But watching the spectacular collapse of Boeing shares has made me more of an optimist. The stock has plummeted from $350 to $129 in a little more than a month, wiping out more than $150 billion of capitalization. It is the swiftness of Boeing’s fall that I find most encouraging, since this could have happened only if the stock’s canny institutional sponsors wanted it to happen. Why on earth would they? Simply because they are quite confident they eventually will recoup their investments — and perhaps even a little something more for their pain and trouble.

And I don’t mean to imply that it will take years or even months for them to get back to flush. More like two or three weeks once the Masters of the Universe sense the exact moment pandemic fears have ebbed sufficiently for them to throw the switch. The story that will enable them to do so is unpredictable. It could be an air carrier adding back flights, or a couple of restaurant chains re-opening with splashy promotions and appealing new menus. It might be an accretion of evidence over the next several weeks that the virus has failed to spread as successfully as it did in Italy. It doesn’t have to be much of a story, and it might even take two or three days for it to get rolling. But when it does, DaBoyz will know exactly when the time is right to pull their offers, setting in motion what promises to be the biggest short-covering panic ever. It will be the reverse of what has occurred as bids have been withdrawn, and it will move the entire constellation of U.S. stocks with the take-no-prisoners ferocity of TSLA’s moon shot in December/January. The stampede will restore trillions of dollars of valuation to America’s balance sheet as quickly as they were lost.

I am no raving bull, as readers will already know, and I came to regard the ability of Boeing shares to remain stubbornly aloft when the company was engulfed in scandal as morally repugnant. Their negligence, after all, had caused the deaths of 346 passengers in two 737 Max crashes. The crown jewel of American manufacturing prowess became my bête noire, churning my stomach every time Boeing stock lifted like a pixie on news of some ethical lapse, corporate blunder or woebegone confession. A solid year of pounding and negative press failed to push BA below $300, barely a third off its $450 record high. After the stock took its initial lumps, it became increasingly clear that DaBoyz were prepared to hunker down and hold BA steady for as long as it took for the squall to pass.

The Fix Is In

But when the pandemic hit, the Masters of the Universe who control BA realized they were outgunned and they let it fall. And while individual shareholders may be reckoning their losses in pints of blood, the portfolio managers whose bread Boeing buttered for a decade are salivating at the prospect not only of making it all back, but of doubling their money on shares they are buying now for a relative pittance. It’s like knowing a late race at Hialeah is fixed so that a 30-to-1 horse will win. What does it matter how much you lose on the first six races when you know you are going to clean up on the seventh?

These guys really know what they are doing, and they have the patience and confidence to wait out the pandemic even if it takes another four to six weeks for fears to subside. The rally they are planning will overshoot even the most insanely optimistic valuations, but don’t be greedy about where to exit. That’s because the top is apt to be fleeting, and the selloff that follows nearly as steep as the short squeeze. All bets are off if the virus is still killing thousands of people six weeks from now. But if the death toll tapers off when crocuses start to bloom and robins sing, be ready for the Mother of All Rebounds.