It Didn’t Take Long for Bulls to Get Cocky 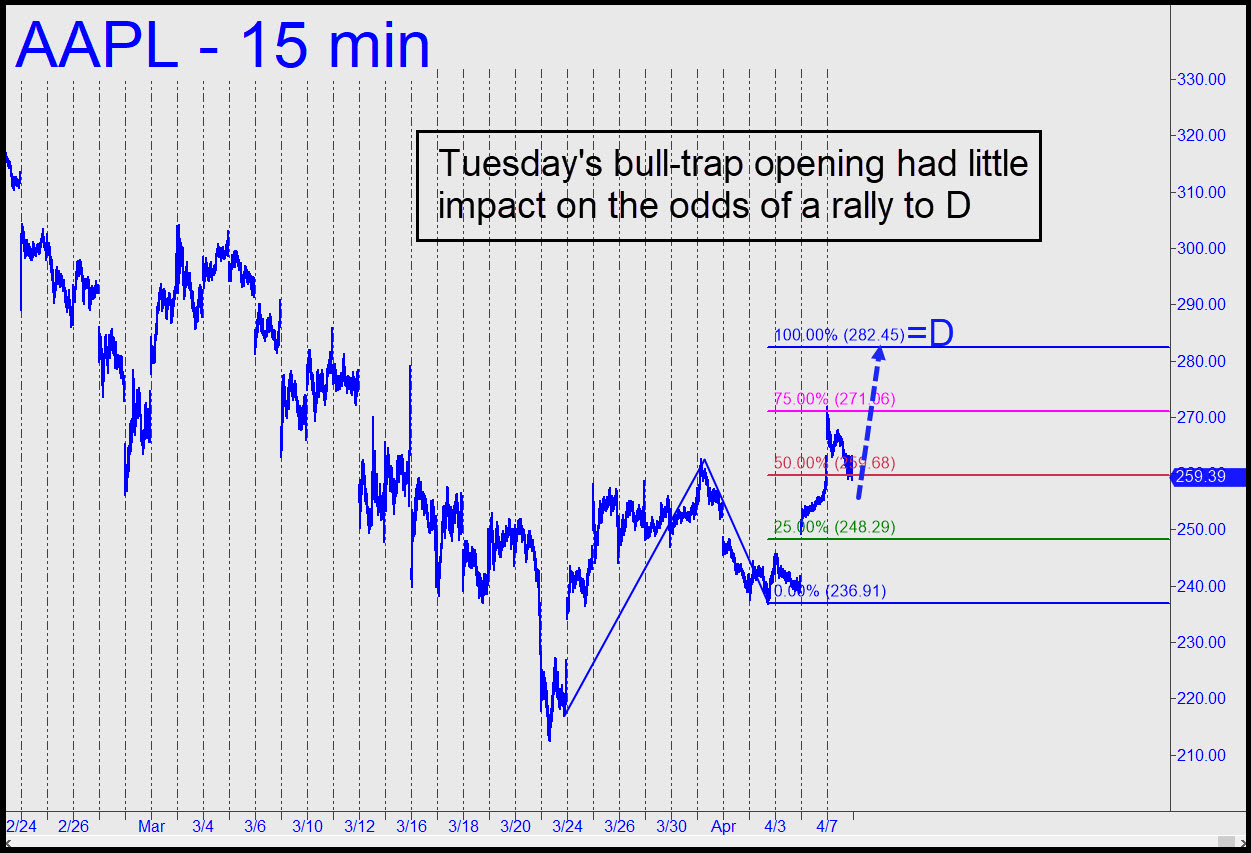 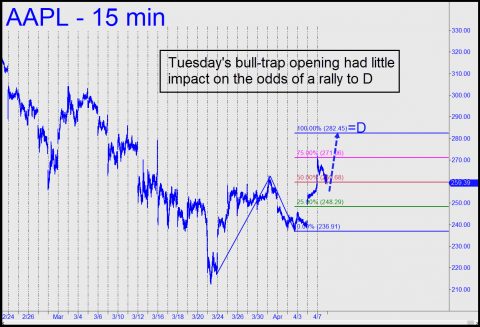 One good rally and everyone’s bullish! How else to explain yesterday’s abortive attempt to do it again?  Just as traders came to their desks Monday morning looking for stocks to plummet, on Tuesday they evidently thought the Dow was going to tack on another 1000 points. When it did so early in the session, it was easy to think this was the start of another monster move. To the contrary, stocks peaked on the opening bar and it was mostly downhill from there. Moreover, weakness in the final hour would have challenged the resolve of anyone bent on bottom-fishing.

The fleeting, bull-trap opening was not quite strong enough to get AAPL or the E-Mini S&Ps to their respective targets. The shortfall in either case was not large, but the subsequent selloff had some subscribers wondering whether I was still confident the targets will be reached. The answer is yes, mainly because of the way AAPL impaled a Hidden Pivot midpoint resistance on the way up Monday. This sort of price action usually means the target associated with the midpoint resistance will be reached. In AAPL’s case, it sits at 282.45, a little more than $10 above Tuesday’s intraday high of 271.10.  That high occurred almost precisely at a ‘secondary pivot’ shown in the chart that stood to be a potential stumbling block for bulls (as I’d noted in the Trading Room). The $12 decline that followed was brutal, but it did little technical damage to AAPL’s intraday charts.

As for the E-Mini S&Ps, they peaked at 2750, somewhat shy of the 2783 target I’d proffered. A trend failure at or near the secondary pivot is concerning, since reversals from very close to this level often accelerate. For now, though, I’ll stick with my forecast that the E-Minis and AAPL will achieve their targets. I’ll be checking their vital signs frequently nonetheless, since the broad averages are doomed to collapse when this rally is spent. Shortly thereafter, when all of the dim bulbs who’ve turned bullish so quickly begin to understand that the damage the economy has suffered will take a long, long time to repair no matter when the virus subsides. Indeed, business is unlikely to return to “normal” ever.