Buffett Too Big to Tiptoe Toward the Fire Escape 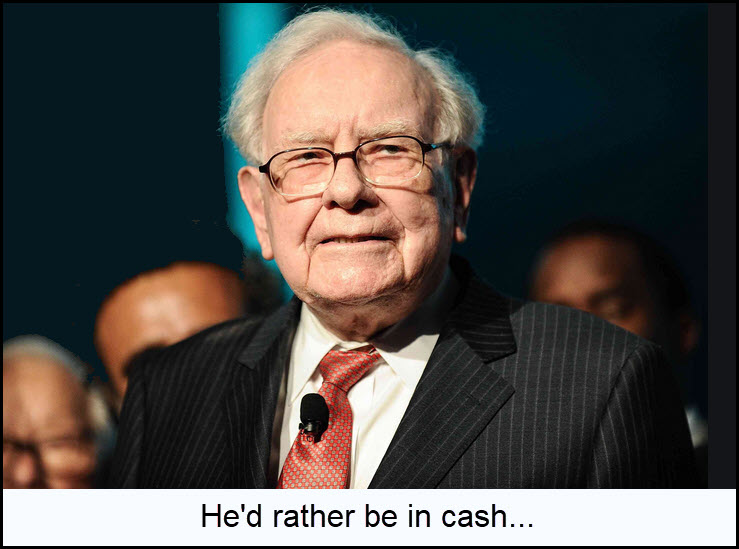 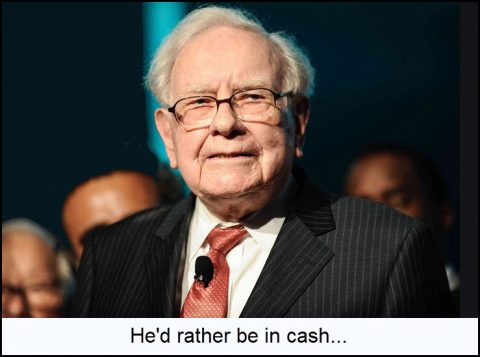 Monday’s commentary typically goes out before markets lurch back to life Sunday evening, but it appeared likely that the weakness we saw on Friday will continue and perhaps gain momentum. Rick’s Picks unfurled the yellow flag just in time Thursday night after the S&Ps and AAPL both failed to reach respective Hidden Pivot rally targets by crucial inches. Concerning the latter, Warren Buffett turns out to have dumped about 25% of Berkshire Hathaway’s $72 billion stake during the first quarter. [Late-breaking note:  I am now informed by my source that Berkshire Hathaway did not in fact sell a significant portion of its Apple holdings, at least not as of March 31. My hunch, however, is that Berkshire eventually will be shown to have sold quite a few shares of the stock as it rallied into the April window. RA] Well before this news, we had characterized Apple’s powerful bear rally as smart money unloading as much stock as possible into a short-covering panic. Buffett being Buffett, he and his ilk have been very careful about not dumping so much stock into the buying frenzy that it might risk overwhelming it. On the evidence, this is exactly what has been happening, and it seems all but certain that Buffett and the Masters of the Universe will continue to distribute stock as deftly as waning demand will allow.

With AAPL’s ascent to heedless levels, the smart guys will probably increase the supply commensurately. We are on record with a prediction that the shares will eventually trade for less than $100. Although Buffett and DaBoyz are not likely to be so bearish, they undoubtedly have the good sense to recognize that exiting above $250 is a time-limited opportunity that might never come again. In any event, Rick’s Picks remains bearish as all get-out because the company makes most of its money selling very pricey cell phones that long ago ceased to offer improvements with ‘wow factor’ and that until very recently were notorious for battery problems. As the world slips into recession-or-worse, the cult of buyers who ordinarily clamor for the latest model every few years will stop upgrading. Another problem is that all assembly work has been done in China and will have to be moved to some place where the labor force and facilities needed to do the job do not yet exist.

AAPL at $100 would demonstrate a pernicious effect of deflation that might sound surreal. The company is sitting on a reported $181 billion cash hoard that would seem impregnable.  However, all of it could easily get sucked into the same deflationary sinkhole that is turning the Guvmint’s multi-trillion dollar stimulus into chopped liver as I write these words. Apple will do everything it can to support the stock as it falls from current levels to below $100, and that would naturally include share buybacks all the way down. Among the sellers will be Buffett and DaBoyz, to the extent that they will have been unable to unload their holdings into short-covering at these absurd heights. If Apple were to buy back, say, 20% of its float over time in an attempt to prop up the stock, the $181 billion could conceivably vanish overnight in the kind of spectacular air pocket that is certain to occur as this bear market unfolds.

In the meantime, the Sage of Omaha is decidedly less bullish than Larry Kudlow, who promised a ‘spectacular 2021’ on one of the Sunday talk shows.  Kudlow, director of the National Economic Council, has always made a good living cheerleading whatever the Administration that employed him was doing, and that’s why we shouldn’t take him too seriously.  But we can still appreciate the guy, since someone’s got to talk the bullish talk or economic reality would quickly become too depressing.  For his part, Buffett is not doing much cheerleading these days, putting his focus instead on the task of unloading vast quantities of stock before the bear market takes another leg down.  He says cash is the best place to be now and for the foreseeable future, and it’s hard to argue with that. We don’t envy him the task of maneuvering Berkshire in that direction before the bottom drops out.