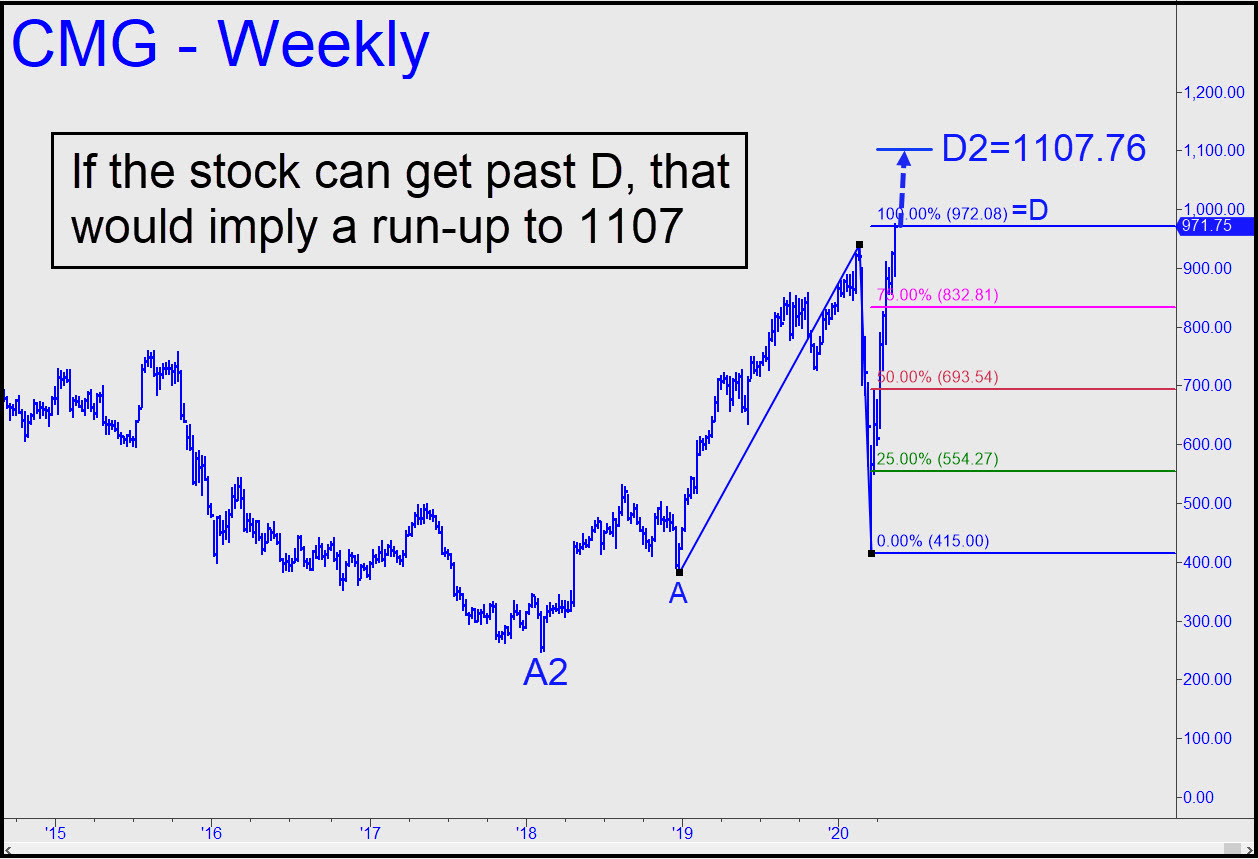 Chipotle makes its first appearance here in more than a year. A subscriber had asked about shorting into the stock’s ballistic rally, but there are surely easier ways to make money. CMG’s ascent into hyperspace is right up there with Tulipmania in the annals of mass folly. Ironically, the stock’s bear market from 2015-18 was caused by two incidents where bacterial/viral agents had been detected in their food. Is business now better than ever, as the move into record territory would seem to imply? Hardly. It’s simply benefiting from investors’ desperate, heedless plunge into the shares of a relative handful of companies that can make money and perhaps even turn a profit in a time of pandemic. The weekly chart shows the stock to have topped last week a micron above a clear Hidden pivot target at 972.08. The implication is if it can close above that number for two consecutive weeks, or trade more than $20 above it intraday, D2=1107.76 will be in play. The latter target is calculated by bringing the point ‘A’ low down to the next obvious place. The ABC pattern is too obvious to work as perfectly as we like for purposes of producing a precisely shortable target,  but it should be good enough for government work. That means a pullback to p=760.49, however unlikely, would set up a so-so ‘mechanical’ buy, stop 645.92._____ UPDATE (May 19, 8:44 p.m. EDT): This rabid wolverine began the week with a $20 short-squeeze gap that has tightened the vise on shorts, if such a thing were possible. It may need a couple of days to digest the move,  but you should continue to use 1107.76 as a minimum objective in any event. Above it there is 1166.99 (120-min, A=599.78 on 4/3). More than ever, it would seem, we are a burrito-eating nation. _______ UPDATE (May 26, 9:29 p.m.): The dirtballs who work this stock popped it to p2=1089.47 before trapping bulls with a $75 plunge. (Nice work, guys.) They unwittingly tripped a mechanical buy at 1011.94, stop 960.25, but I’ll suggest spectating this time, the better to develop confidence in mechanical trades, which by their nature are usually going to be pretty hairy. ______ UPDATE (May 28, 10:24 p.m.): The stock looks as if it has been propped up for distribution over the last two days, probably because its handlers are losing confidence they can hold it aloft if the broad averages give way ahead of the weekend. The ‘mechanical’ trade we passed up is looking shakier at the moment, but we’ll remain spectators in any event. _______ UPDATE (June 1, 7:35 p.m.): The stock’s talented handlers hung in there for long enough last week to exhaust sellers, keeping the mechanical trade very much alive. It is showing a theoretical profit at the moment of around $14,000 on four round lots, but that would grow to around $62,000 when the 1166.99 target is reached.  Judging from the way DaBoyz held the stock firm at $1000 for four days, odds would appear low that CMG will NOT achieve 1166. Here’s the chart.