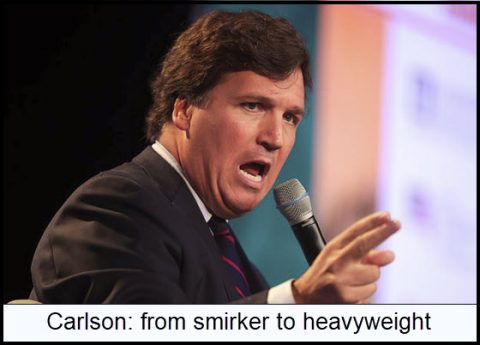 Each of us seeks our own version of the truth when we turn on the news. Tucker Carlson, one of the most courageous and honest journalists of this era, is my choice. He has excoriated Democrats and Republicans alike for their moral cowardice in coddling torch mobs. I can’t get my liberal friends to watch him, however, probably for the same reasons they could never get me to watch Rachel Maddow.  It’s true that Carlson used to give snarky interviews to political radicals whom he never took seriously. But he takes them very seriously now because of the grave threat they have come to pose to individual freedom and to the American experiment itself.

I do wonder sometimes what Maddow has been saying about Biden’s supposedly big lead in the polls. This is about as unbelievable as headlines get these days, although it hasn’t stopped Fox News and its chief political analyst, Karl Rove, from taking the surveys seriously. The network’s mostly conservative viewers scoff at such twaddle, having learned their lesson when Hillary’s widely predicted victory in 2016 failed to materialize. This time the polls are wrong simply because the news media and the popular culture have bullied millions of Trump voters into silence. There are many quiet converts going uncounted as well. They include not only a significant number of Jews I know who a year ago could not have imagined themselves ever voting for a Republican, but also some well-closeted apostates in Boulder and San Francisco, where I lived, respectively, for 19 and 22 years.

More unbelievable than Biden’s strong poll numbers are unemployment data that suggest the country is in a strong economic recovery. Trump never tires of telling us how super-amazingly strong it is, but many if not most Americans probably reject this narrative because they can see the falsehood of it in their own lives. They recognize how their spending habits have changed and how very long it could be before they go to a concert or baseball game, board a cruise ship or an airplane, dine indoors at a restaurant, or travel via subway or bus. A handful of retailers may be doing brisk business, but most will not survive even a 10% hit to margins. Airlines are particularly vulnerable because their profits come from squeezing passengers like sardines.

Retail armageddon aside, the big question is how long it will take before the Republic is in an actual state of civil war. The shooting is likely to begin when Marxist rowdies try to take down the wrong statue in the wrong town. Boise, Idaho, maybe, or Springfield in any of a dozen states. Some of these horribly misguided ‘youths’ will get shot, and the war will begin. It will end quickly, fortunately, because the red team’s militia possesses overwhelming firepower and is ready to use it.

Concerning the desecration of public monuments, every decent American should be more than merely appalled. It is one thing for rioters to burn stores in a fit of rage; however, the sight of these miscreants toppling statues of Washington, Lincoln, Jefferson and Teddy Roosevelt is far more frightening because it reveals that their goal, and even that of peaceful protesters, has less to do with black lives than with gaining political control over what we are allowed say, to do and even to think. Do enough Americans fear this to put Trump over the top in November? The answer, probably, is yes. It stretches credulity to believe voters will turn to the Democrats to fix urban blight that they themselves have brought on themselves over the past 50 years.

Most big cities have either a black mayor, a black police chief or both. Perhaps four more years of Trump will give voters ample time to face up to the fact that America’s biggest problem is not racism, but rather indigo-blue governance that favors teachers’ unions over students, multi-layered, fat-cat bureaucrats over taxpayers, and encampments of drug abusers over homeowners. In the meantime we ought not get our hopes too high that political tensions will subside. More likely is that they will only worsen between now and November, possibly degenerating into physical violence on a wider scale than we saw in June. _______ UPDATE (Jul 6, 4:41 p.m. EDT): Tucker in 2024? A few subscribers were gung-ho about this, but in politics, as we know, only the dregs float to the top. He’s already doing worlds of good where he is, setting an example of honesty, objectivity and courageousness for anyone who wants to be a journalist.