Stimulus Is Now a Mushroom Cloud 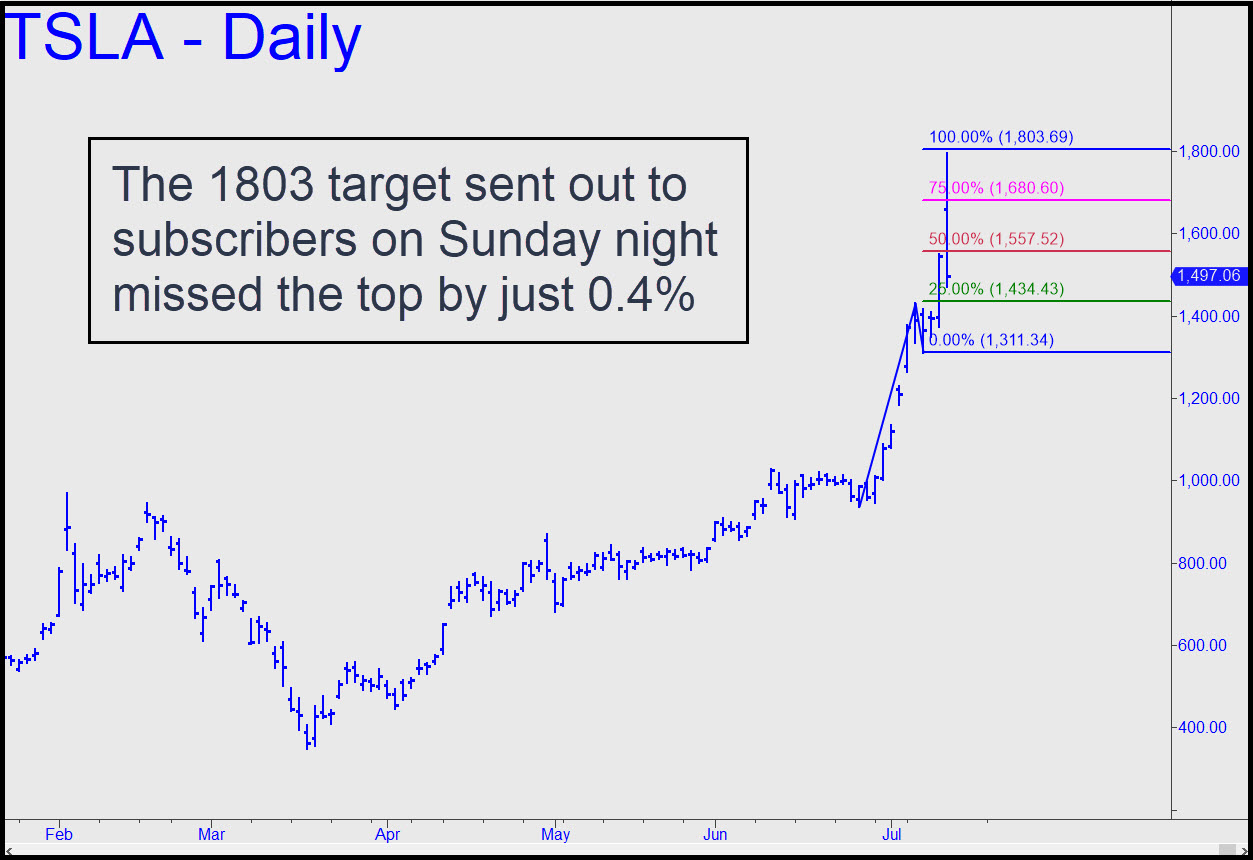 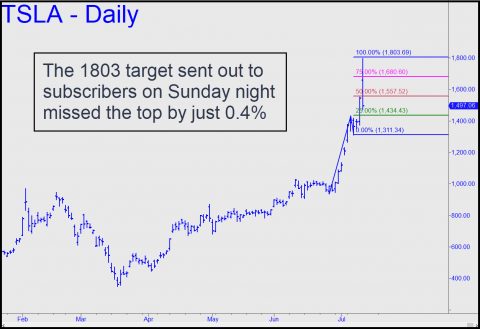 I’ve tried to be extravagant with my rally targets, since I don’t want the permabear in me to queer profit opportunities just because the stock market has been rallying against every molecule of instinct I possess. But I could scarcely have imagined that when I put out a technically derived 1803.69 rally target for Tesla Sunday night that lay 255 points above the stock’s previous close (see chart above), the stock would summit this Everest the next morning. As the chart shows, the forecast didn’t do too badly, since the stock topped Monday just four-tenths of a percent below the target before relapsing an exhilarating 300 points.  In my TSLA ‘tout’ (see below), I’d noted that an 1803 top might actually disappoint some investors who think in nice, round numbers. $1800 is so close to $2000, how can the stock possibly miss, right? But it may actually have done so, since the large number of bulls who got badly trapped when TSLA plummeted from its fleeting high now constitute huge, and perhaps increasingly desperate, source of supply. If TSLA is to exceed Monday’s peak eventually, it is likely to entail more of a struggle than we’ve become used to.

AAPL, the second biggest-cap stock in the world, performed with similarly reckless abandon, blowing away a seemingly ambitious target at 391.08 by nearly $9.  This would have put about $40 billion of fresh paper profits into the hands of those with sufficient daring to still be aboard. Much as we’d all like to think anyone holding onto TSLA and AAPL at these levels shares DNA with a hubcap, it’s hard to argue with the estimated $40 billion they made on paper.  Of course, they’ll have to sell the stock sooner or later to realize those gains, and they’d better not all try to do it at the same time.  It is nearly inevitable they will try, actually — almost as predictable as that the sun will rise in the east. No one can say when common sense will achieve the requisite black-hole mass, but there is every likelihood that the selling panic this causes will get just as overdone as the current, psychotic buying binge. That is why, for the record, I’ve forecast that AAPL eventually will trade for under $100.

Shock Wave, then a Firestorm

Although I did not comment here yesterday on the headlined, bullish letter from an investment advisor to a wealthy friend of mine, anyone trying to make a case that investors should stay in stocks at these heights is either lug-nut spawn, a Wall Street shill or a wealth manager bereft of alternatives. I’m wondering whether even Wall Street liege Larry Kudlow actually takes the rally for real. One should think it’s becoming increasingly difficult for Kudlow, the President or any of his economic cheerleaders to shamelessly assert, for the presumptive benefit of the herd, that the stock market’s psychotic behavior somehow reflects an economy on the mend.  In fact, it seems clear that commerce in the U.S., broadly speaking, is headed into a second shutdown as the pandemic threatens to go out of control. If we could have foreseen this in April, a bet that Dow was headed to 10,000 or lower would have seemed reasonable. Instead, the ridiculous rally that has in fact occurred was beyond imagining at the time.  So what lies beyond imagining now?  That’s the question we should be pondering, since this mushroom cloud of stimulus cannot but be followed by a massive shock wave and firestorm. _______ UPDATE (Jul 14, 9:28 p.m. EDT): While we might have expected bulls to take another day of pounding after Monday’s drubbing, they instead danced a jig as sellers dumped everything they had into their eager hands.  After a mere day’s pause, the relentless bidding war in AAPL and TSLA (see below) in particular seems capable of turning Monday’s record highs into chop suey, and soon.