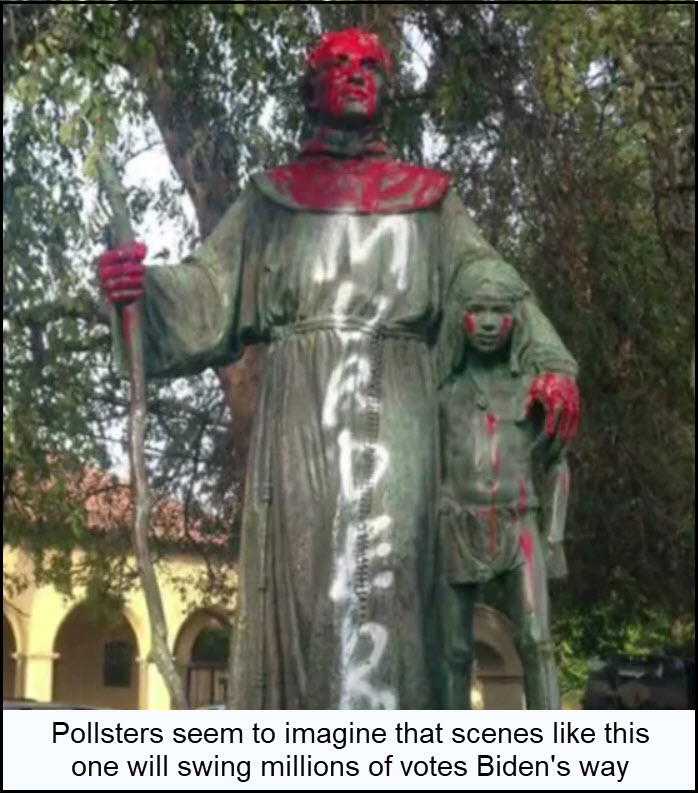 If Trump wins in November, it is foreseeable that his many enemies will ratchet up their hatred for him to even more destructive extremes. A bloody civil war would become likely, escalating an already violent cultural battle to a new threshold. How this might impact our schools, workplaces and neighborhoods is unpredictable even if the tactical outcome is not. The red states, wide-open spaces where politically conservative Americans tend to live and work, have superior firepower, to put it mildly, and their geographical vastness has rendered them invulnerable to attack.

They also provide most of the food consumed by blue-zone denizens, implying red partisans could lay siege to blue, bringing the color war to a relatively quick end. Natural allies in flyover states include farmers, truckers and meatpackers, along with private-sector workers everywhere whose bosses do not report to diversity officers. Political liberals have taken to boycotting the wares of nearly everyone perceived as unfriendly to their cause. It remains to be seen whether conservatives can get sufficiently aroused to return fire, not only by boycotting every product or service tied to virtue-signaling, BLM-pandering corporate suck-ups, but by disrupting the flow of essentials into the big cities where political radicals live.

It is not hard to imagine the Democrats’ urban strongholds running up the white flag in a month or two, when they’ve come to resemble hell-holes like the ill-fated Chaz in Seattle.  Cities that have been run into the ground over the last 50 years by Democrats would become far worse, virtually unlivable even for the dregs. Who would want to remain in such a place? Even Antifa, when they are done looting and setting businesses ablaze, return to their parents’ basements to quaff beer and watch themselves on television. Watching themselves starve would surely take the fun out of their Visigoth notoriety.

I used to imagine that America’s Second Civil War would begin when a gang of Che wannabes got caught in the middle of the night trying to topple a statue in Boise, Idaho. The local militia would put a quick end to this mischief while the perps’ 911 calls went unanswered for a few critical minutes. They’d become instant martyrs on CNN and MSNBC, but only for the dwindling audience that still tunes to these stations for news. Although this scenario seems likely to play out somewhere in America, and perhaps in many places, a siege is even more likely to decide the coming war’s outcome.

Small-Town Papers Will Save Us

We shouldn’t get our hopes too high that it will make the nation a better place  overnight. The culture wars will continue, perhaps for decades, and those who have poisoned Americans’ sense of themselves will be extremely difficult to dislodge. This is notwithstanding the fact that most of us recognize we are not racists, that our history is not deserving of shame, and that we are not the monsters we are portrayed to be by those who foment the news.  Ironically, a revival of small-town newspapers is the best pathway we have for restoring the values that made America great. This will happen because the demand for news at the local level has always been insatiable. It remains for entrepreneurs to find ways to gather and distribute news economically by jettisoning the brick-and-mortar model.  Once revived, small-town papers will allow Americans to come together in ways that we cannot as long as the major purveyors of news act as provocateurs.

Concerning Trump’s odds in November, it’s hard to see how he could lose. The canvassers are even more wrong than they were in the months prior to the 2016 election.  Conservative pollster Karl Rove deserves special opprobrium because he should know better. He’s been so busy splitting electoral hairs in blue-collar states like Pennsylvania, Ohio and Michigan that he’s blind to the massive shift of working men and women away from the Democrats that began 50 years  ago. Construction workers were fed up then with sending their sons to Vietnam to die while campus protestors dodged military service. They are even more fed up now, having witnessed the implosion of the nation’s schools, the abysmal failure of a $20 trillion war on poverty, the heightening of racial tensions to a state of war, and now, the abandonment of our biggest cities to sociopaths.

These are the voters that the  polls would have us believe are in Biden’s back pocket?  Add in fifteen million centrists who wouldn’t dare confide to a stranger from Harris or Gallup that they plan to vote for the Orange Man, and you can see why Trump is going to win, and not by just a few votes.  His re-election cannot but beget a violent reaction, as noted above, but it will take nothing less to produce a catharsis capable of putting America back on track. As leftists are fond of saying, you cannot make an omelet without breaking eggs.