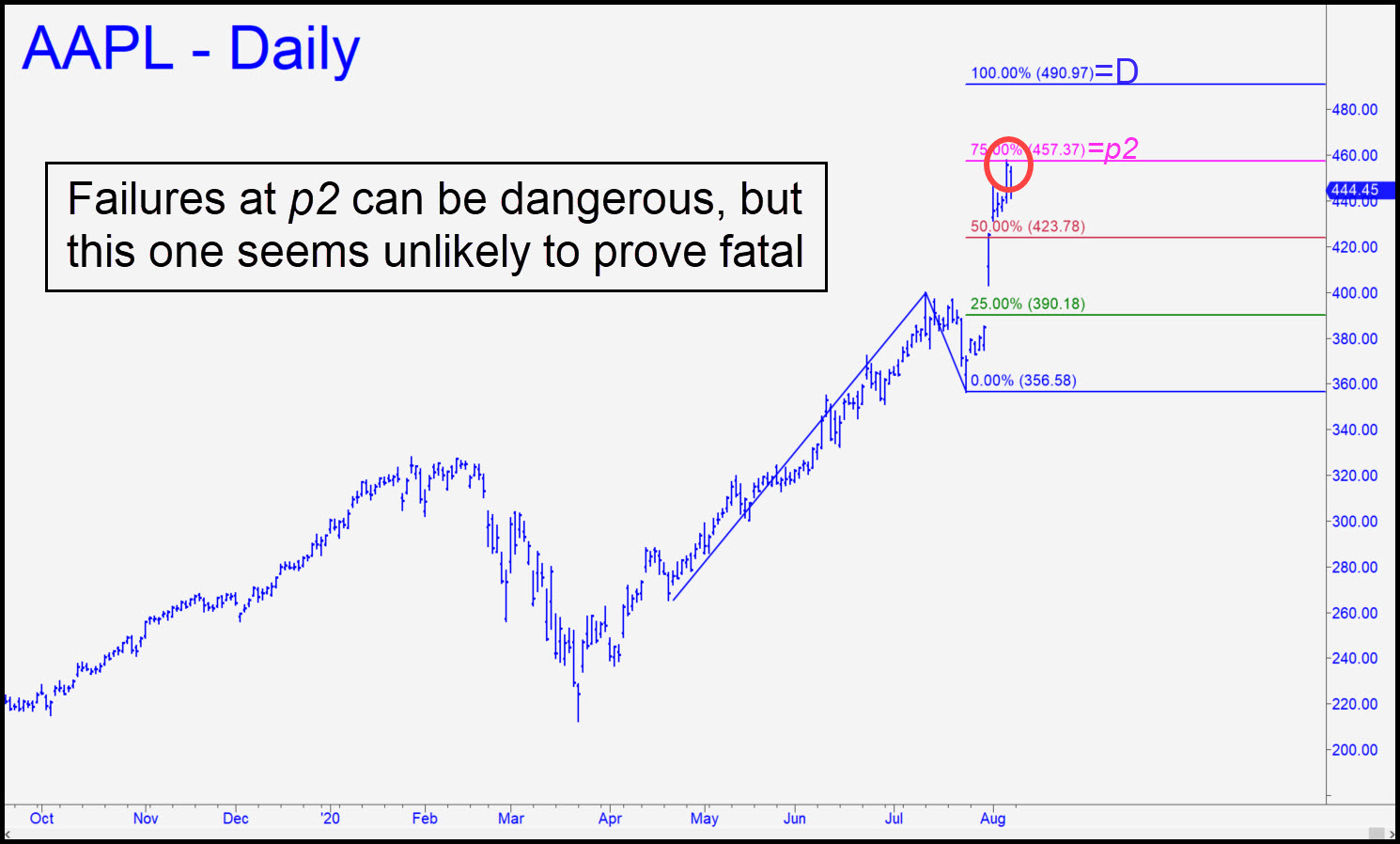 The stock’s vertical climb reversed Friday from within a hair of a technical target I’d drum-rolled a while back, allowing subscribers to initiate short positions with puts that went in-the-black almost instantly, just as we should prefer.  We all ended the day wondering, however, how long it would take for The Thing That Wouldn’t Die to rev its jets for another rampage.  I’d estimate that an eventual move to at least 490.97, the Hidden Pivot target shown in the chart, is an 80% shot, given the way short-covering madmen gapped the stock through two HP levels in just two days as August began.  By last week, though, buyers were overdue for a breather, even if not looking spent. Although a retracement to the red line (p=423.78) would trip a ‘mechanical’ buy, I’ll suggest holding out for even better prices if we should decide to jump in at all. AAPL hasn’t had a correction lasting longer than three consecutive days since before the March crash, but if it were to whip around early this week and take out last week’s record peak on less than four days’ rest, that would be amazing but also appalling, since it would imply a degree of heedlessness and greed on the part of buyers (including the Swiss central bank, apparently) that until now had been unimaginable. AAPL has friends in high places, but that doesn’t mean they aren’t just as crazy as lowly portfolio managers who are paid to stay fully invested at all times in just ten stocks. _______ UPDATE (Aug 10, 8:05 p.m. ET):  It turns out that Switzerland owns $6.3 billion worth of Apple shares, and that the burghers are continuing to add to this position with flim-flammery that even Powell & Co. must envy.  Here’s the full story from Wolfe Richter. _______ UPDATE (Aug 11, 8:15 p.m.): The original chart (see inset) noted that trend failures at p2 — in this case 457.37 — can be dangerous, but I downplayed the possibility it would be fatal this time. Even so, the stock has now fallen on three of the last four days since encountering p2, and so we should be open-minded to the possibility AAPL has made an important top. If so, we should start to see downtrending abc patterns of minor degree exceeding their d targets, and uptrending ABCs fall short of theirs. _______ UPDATE (Aug 12, 4:43 p.m.): So much for that theory.  AAPL will need to close for two consecutive days above p=457.37 to clinch a trip to 490.97 (see above), but bulls seemed to be rehearsing for it all day long on Wednesday.