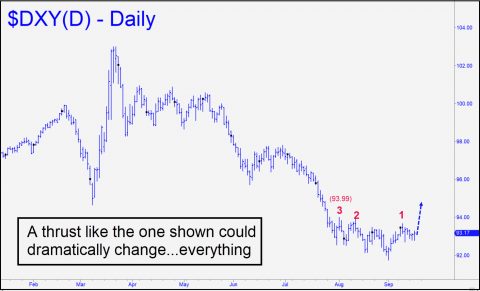 As observed here earlier, nearly everything has begun moving in lockstep opposite the dollar. Today, the effect of a modest bullish upturn in the dollar was both precipitous and precise. A strong dollar is the worst nightmare not only of the thimble-riggers at the Federal Reserve, but of everyone who owes dollars. That includes even mortgage borrowers who are financing at the lowest rates in history; for even a 2% mortgage can become a crushing burden when home prices are  falling by 10% a year. That prospect is no less likely now than it was just before the financial collapse of 2007-08, when the average home in the U.S. lost about a third of its value.

The good news for inflationistas, at least for the time being, is that the dollar does not appear poised for a major run-up. Although it bounced from a multiyear trendline a couple of weeks ago, the initial thrust from a technical standpoint has been less than impressive.  Although the greenback could continue to strengthen, putting pressure on stocks, bonds, crude oil and bullion, prayer may suffice to mitigate the effect over the near term. However, if a thrust erupts like the one shown in the chart, surpassing the three numbered peaks, stock market bulls had better prepare for a bumpy ride. ______ UPDATE (Sep 17, 10:44 pm ET): Bears went all weanie Thursday afternoon, allowing the crazed mob to claw back most of a 60-point loss racked up in the early going.  The stench of distribution is so strong, however, that it seems likely stocks will be trading lower by next mid-week, if not sooner.