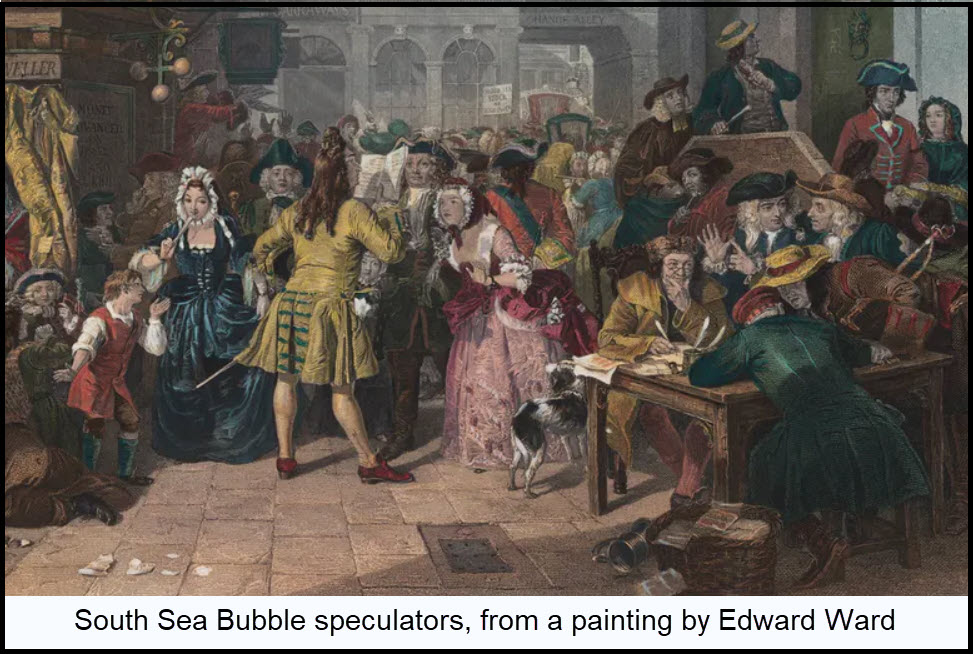 What came to be known as the South Sea Bubble was so pumped up before it popped in 1720 that investors apparently viewed nearly every opportunity as a sure thing. The York Building Company, for one.  After being purchased by the Hollow Sword Blade Company, it mutated into a provider of water to London, to a buyer of confiscated Jacobite estates in Scotland, to an insurance company. With this checkered past, the stock still soared from £1oo to £1000 in a single year. The South Sea Bubble itself involved slave trade and rights to conduct business with trading companies in the New World. Rich and poor alike were enticed to pour their savings into such ventures, ostensibly because they believed there was no way to lose. Even Isaac Newton, whose IQ supposedly was around 200, got suckered. He made a pile of money and cashed out when the bubble was in its early stages, but he plunged in again just before the bubble burst and lost everything he’d made — about $20 million in today’s dollars. Newton is said to have remarked, woefully, that  “[he could] calculate the motions of the heavenly bodies, but not the madness of people.”  How crazed were they? One inventive firm that went public in 1720 famously advertised itself as “a company for carrying out an undertaking of great advantage, but nobody to know what it is.” Suffice it to say, enough pigeons went for this pitch to make the company’s promoters rich. It is not known whether any of the company’s shares were in Newton’s portfolio.

If all of this sounds too stupid to actually have occurred, then you haven’t heard about SPACs.  The acronym stands for “special purpose acquisition companies,” and they are all the rage these days on Wall Street. The name itself sounds like a bunch of baloney, like most of the financial instruments that make up the $1.5 quadrillion derivatives market. However, we know from Newton’s saga that it is not just fools who are throwing their money at SPACs, which are also known as blank-check companies. Typically, they raise money via IPOs to buy businesses, but without knowing specifically which businesses they plan to acquire. SPACs have raised more than $40 billion so far this year, about 75% of it since July 1 — a hot ticket, for sure, and a fabulous source of lucre for pitch-men who are already billionaires. One of them, Alec Gores, was reported by Bloomberg news to have netted more than $80 million, a sixfold return, on a SPAC deal.  Regulators reportedly are concerned that Joe Sixpack — now get this! — does not fully understand how SPACs work. Although the burgeoning success of SPACs cannot tell us exactly when such foolishness will bring the sky crashing down, it is as good an indicator as we have that a crash is indeed coming.