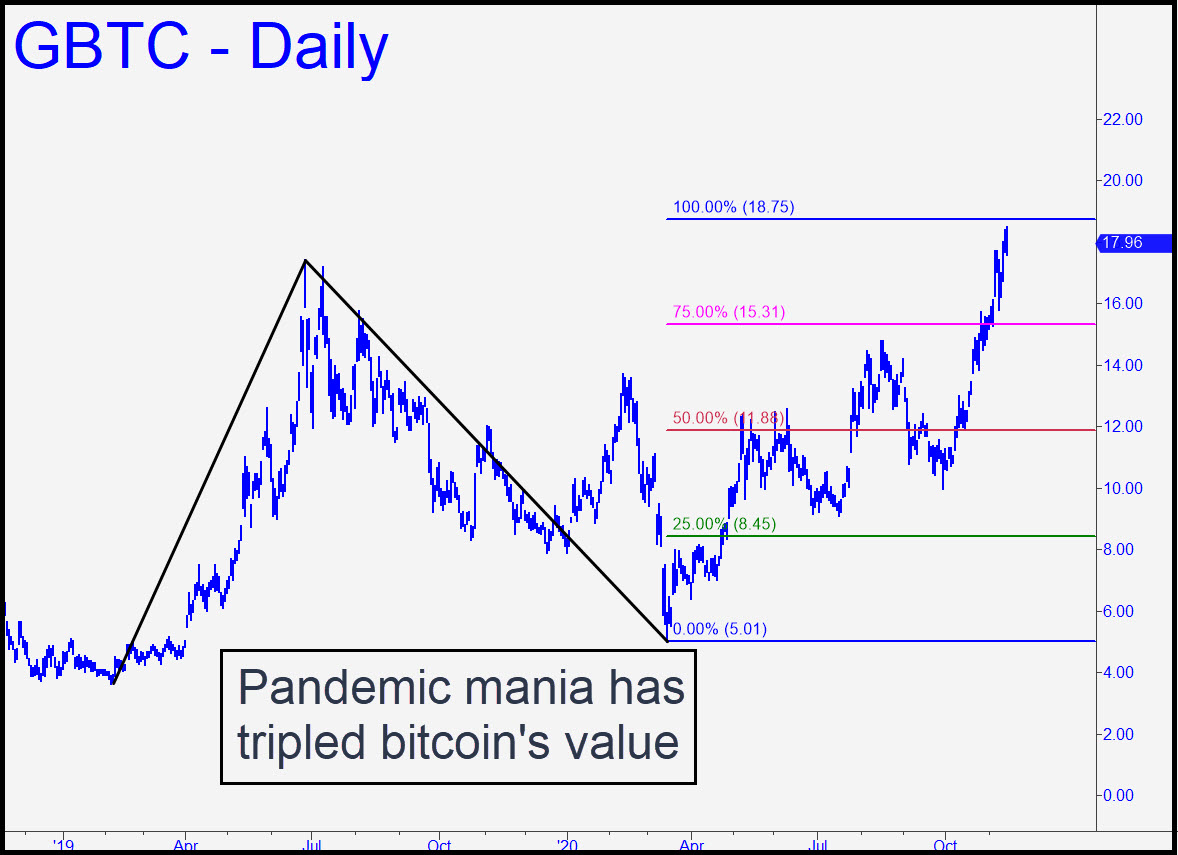 Bitcoin’s value has tripled since Covid-19 hit the U.S. in March, a spectacular performance that has earned it a spot on the home page.  I’ve been tracking the BRTI symbol for years because its violent price action is ideally suited to ‘mechanical’ entries. Nearly all of them have been profitable, and we currently have a paper position in BRTI acquired at 7609 with a long-term target at 21,032. That symbol tracks best-bid/offer data in real time across many cryptocurrency markets. I will be covering GBTC from this point forward, however, because it is affordable and because entry risk can be much more tightly controlled.  Most immediately, you should notice that the steep rally leg begun in October is within an inch of a potentially important Hidden Pivot resistance at 18.75. If it is impaled the first time it is touched, that would imply significantly higher prices lie ahead. In any event, it is a time for caution no matter how bullish you are.

My decision to track and trade bitcoin is completely detached from my strong feeling that digitally encrypted money is an epic con-job. I don’t deny that blockchain technology has enormous value for financial transactions and secure record-keeping. But no one has offered a shred of evidence as to why bitcoin should have any intrinsic value at all, let alone more value than gold, as some have tried to argue.  My skepticism is irrelevant where trading bitcoin is concerned, however, especially since this vehicle promises  to be one of the great bull trades of these digitally obsessed times. _______ UPDATE (Nov 17, 7:36 p.m.): GBTC blew past the 18.75 Hidden Pivot resistance with such force that there can be little doubt that significantly higher prices lie ahead. Even so, we should be curious to see whether BRTI follows suit. Today’s surge came within a micron of a 17,887 target that could be expected to show some stopping power. _______ UPDATE (Nov 18, 8:29 p.m.):  BRTI has pulled back sharply after hitting the 17,887 target precisely, so caution is warranted in GBTC.  A mechanical buy would be triggered on a pullback to the green line (17.19) shown in this chart, but using a set-up at the red line (18.62) would be riskier. ______ UPDATE (Nov 19, 8:25 pm.): A run-up to 21.48 (see chart in previous update) is not in doubt, but there is a question of whether Mr. Market will gift us with a pullback to get long on-the-cheap.