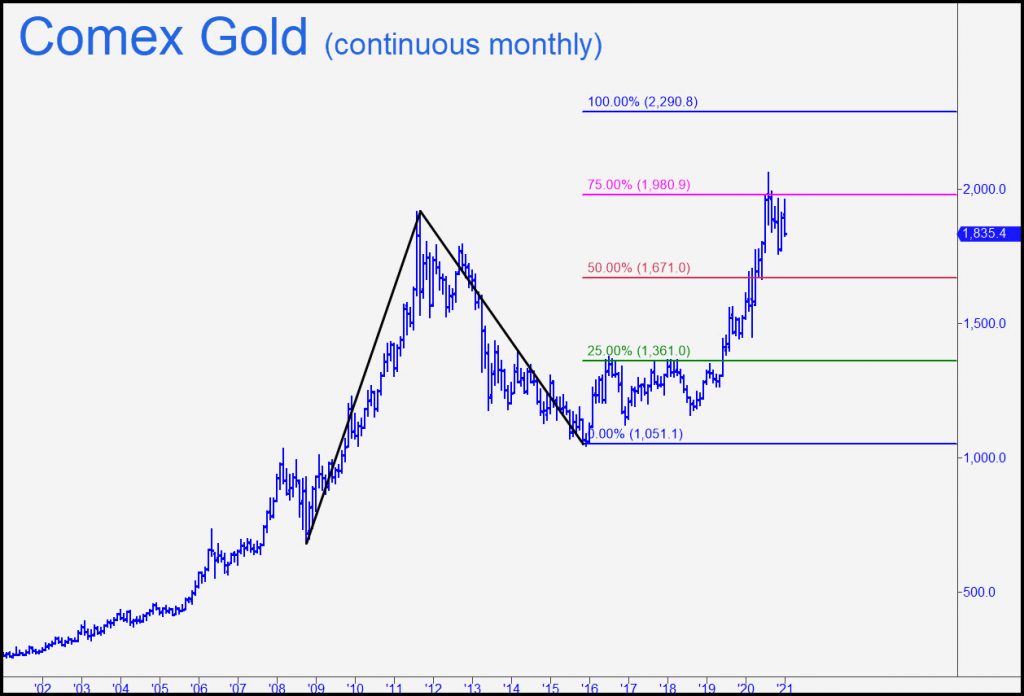 With gold’s gratuitous, 4% plunge on Friday, bullion has once again affirmed its reputation as one of the nastiest, most frustrating assets an investor can own. Its chief enemy is a global network of shamans, thimble-riggers and feather merchants who make their living borrowing bullion from the central banks for practically nothing, then lending it to everyone else for slightly more. They are always looking for excuses to pound quotes so that they can replace what they’ve borrowed at a lower price. Helpful to this goal is a story that, however ridiculous, spooks gold bugs into dumping their holdings. The current story is that the Democrats will somehow be bad for bullion, although no one can say exactly why. To believe such claptrap is to implicitly believe that when Kamala Harris takes over for the mentally failing Biden, she will impose rigorous constraints on spending that will strengthen the dollar. Yeah, sure. But that’s not the point. The balance of power is about to change so radically in Washington that no one really knows what will happen next. For all we know, the Republic might not survive until mid-term elections in 2022.  If such a grave crisis is in fact bearish for gold and silver, then Harris, Schumer and Pelosi are bullish for America and the dollar; Greenspan, Bernanke and Powell were skinflints; John Wayne was a homo, and beer causes cancer.

The bottom line is that we should tune out bullion’s rigged swoons until the crooks and shysters are ready to let it run. Sometimes it takes courage and conviction to stay the course, and this is one of those times. The chart shows that gold’s correction since August has been moderate and that when it ends, there is potential for further appreciation to at least $2290/oz. That’s a 25% gain from current levels — sufficient to outperform the broad stock averages just as bullion has reliably been doing for years.

There is just one caveat for gold bugs — the possibility market forces will make it impossible for the Federal Reserve to continue doing ‘whatever it takes’ to keep the asset bubble fully pumped. It is one thing to force-feed money into the economy so that consumption does not collapse. But will the central bank be so accommodating when it is a cavernous socialist maw demanding to be fed? Well before then we could see market forces that have been pushing  up Treasury rates recently make further easing impossible.  Tightening is not even remotely on investors’ radar at the moment, but even a small turn of the screw would devastate stocks and bullion. The former would likely be down for the count, while gold and silver might be expected to get second wind once investors figure out that Tesla, bitcoin and junk bonds are poor places to store wealth. Hold onto to your ingots and doubloons in any event, since, in the worst of times, they are certain to retain their purchasing power relative to all other types of investable assets.