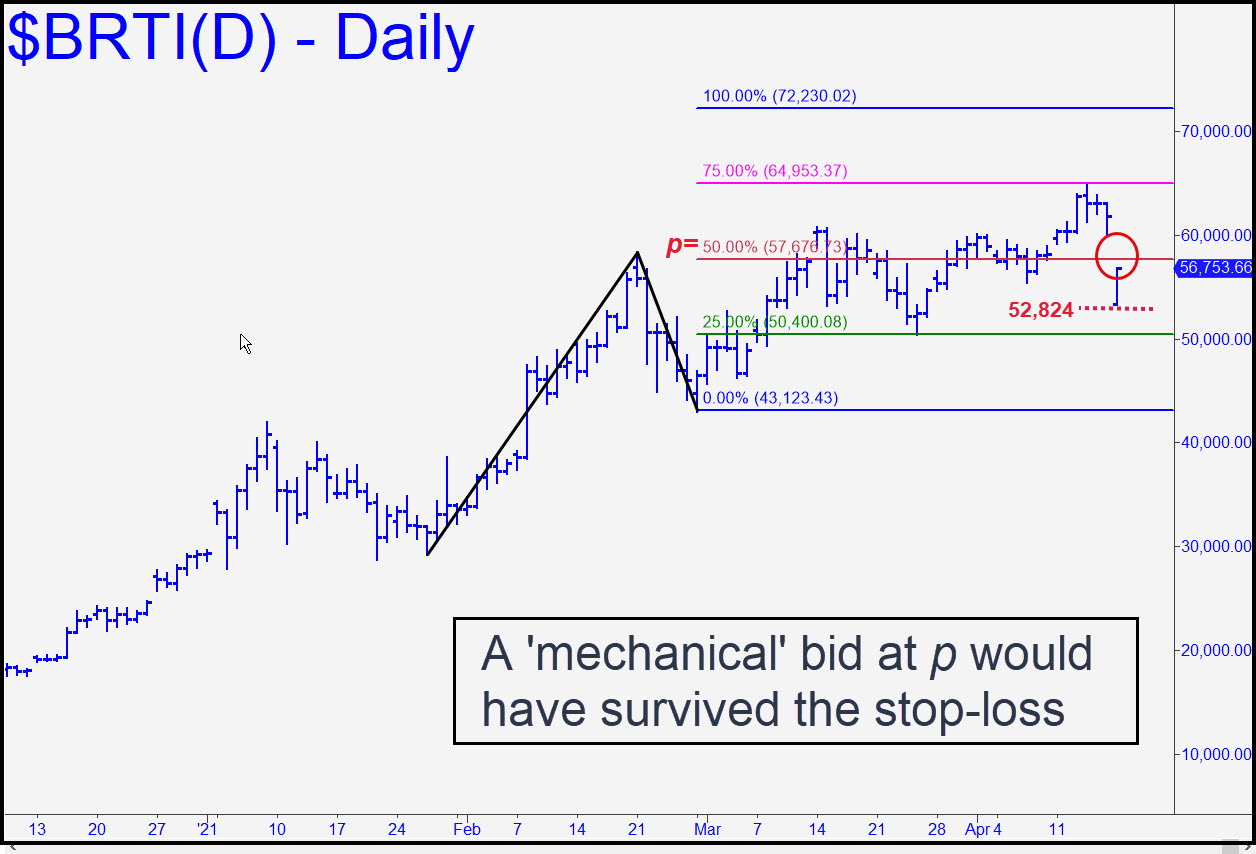 Although bitcoin got savaged Sunday morning when it opened more than $11,000 beneath Friday’s close, the plunge would not have stopped out a long position acquired ‘mechanically’ at p=$57,676, the red line. I had not recommended the trade explicitly, but I am mentioning it now to buttress your awareness of how powerful upthrusts such as we have seen in bitcoin tend to produce ‘mechanical’ buy signals that are profitable. Realize as well that ‘dynamic’ moves invariably beget violent counterswings such as Sunday’s. In any event, the 72,230 target of the pattern shown remains viable, as does possible resistance at 66,680, the ‘D’ target of another pattern.  A relapse is possible as well, and that’s why I’ll suggest partial-profit-taking when possible if you did the trade on your own initiative. A second buy signal would be triggered if the relapse were to touch the green line at 50,400. _______ UPDATE (Apr 19, 9:26 p.m. ET): There’s no question that a pullback to the green line (50,400) would trigger a quite enticing ‘mechanical’ buy, especially since no set-up of this magnitude has failed to produce a profit. The trade is certain to be telling if it triggers, and if it works, my gut feeling is that the turn will have come not at the green line, but from around 48,804, a ‘d’ pivot culled from the decline since last week’s record high at 64,858.  I will create a tracking position in any case, but my advice is to paper-trade this one unless you have made far more on bitcoin than the nearly $30k you’d be risking on four lots. _______ UPDATE (Apr 21, 5:02 p.m.): What a thrashing bulls and bears are getting! That’s why I will continue to focus on the bigger picture, as above, tuning out the noise. _______ UPDATE (Apr 22, 9:58 p.m.): You can use 48,771 as a place for a tradeable bounce if 48,804 doesn’t do the job. I mention this only because I expect one or the other to work very precisely.  _______ UPDATE (Apr 23 at 9:56 a.m.): Sharp weakness overnight overnight drove bitcoin down to $48,568, about 0.4% from my $48,771 target. The bounce from the low carried nearly $2000, but a subsequent relapse created a new low at $47,529 that has given way to a so-far $2820. bounce. The bottom line is a ‘mechanical entry at 50,400, stop 43,122, that I had earlier suggested paper-trading and which is predicated on a rally target at $72,230. If the target is not reached, that would suggest weakness and doubt have infected bitcoin in a way that hasn’t been seen since the 2018 crash from 19,707 to 3,143.