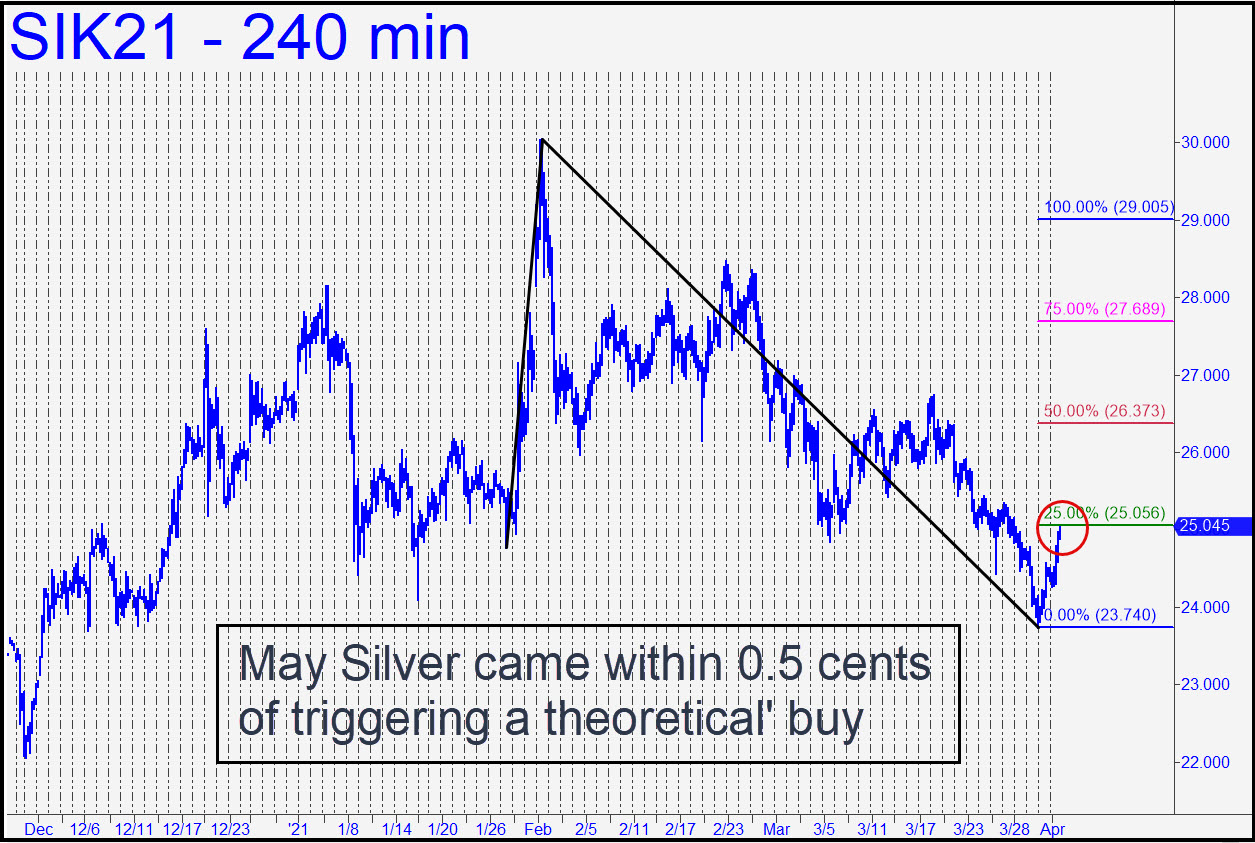 May Silver came within a half-cent on Thursday of tripping a theoretical ‘buy’ signal at 25.05 tied to a rally target at 29.00. The rally began Wednesday from a 23.74 low 46 cents above a 23.28 Hidden Pivot support I’d flagged as a potentially juicy buying opportunity. Some of you may have jumped the gun, to good advantage, since, in the chat room, ‘Farmer’ did everything but fire a cannon to alert subscribers to an imminent turn based on his own ‘technicals’. We shall see. If the rally lengthens, surpassing some small ‘external’ peaks shown in the chart without pausing for breath, that would be most encouraging, especially since it will have begun with a clear correction target having gone unfulfilled.  The pattern shown in the chart is a ‘reverse ABC’, but I expect it to be serviceable for trading purpose and for gauging the strength of the rally along the way. A two-day close above p=26.37 or a spike decisively through it intraday would strongly imply more upside to D=29.00. _____ UPDATE (Apr 5, 5:41 p.m. EDT):  A timid feint higher Sunday night tripped a theoretical ‘buy’ signal, but the futures have gone nowhere since.  On balance I am mildly bullish, using the pattern shown in this chart for now.  Notice that today’s pullback to the green line triggered a seemingly appealing ‘mechanical’ buy that is only slight profitable at the moment after having gone $850-per-contract in the red intraday. The pattern’s 25.47 ‘D’ pivot can serve as a minimum upside objective for Tuesday. ______ UPDATE (Apr 8, 10:36 a.m.): The futures popped exactly to the 25.47 target in the dead of night, pulled back briefly then launched a new leg higher. The 25.775 target shown in this chart can serve as a minimum upside objective for now, but if if gives way easily, that would imply a test of the mid-March peak at 26.74 is likely.