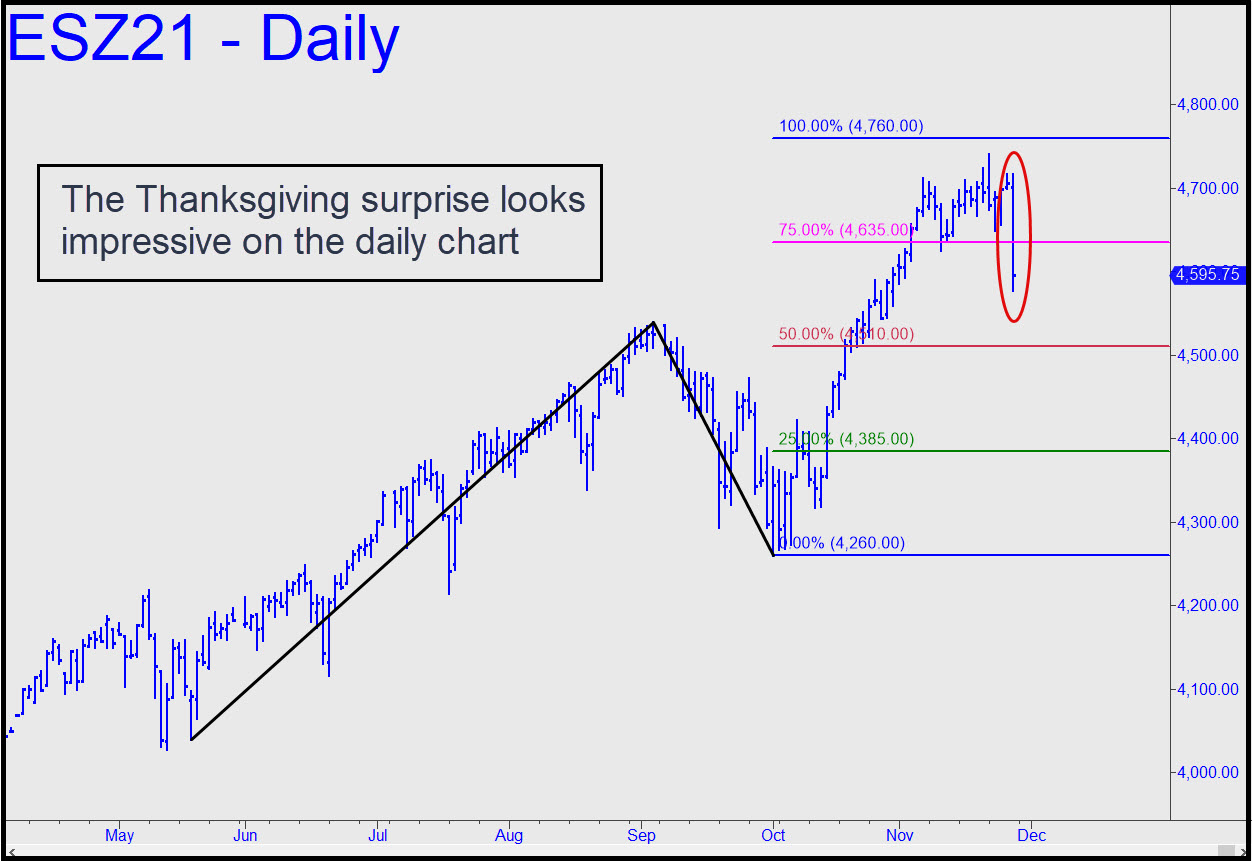 Elsewhere on the page, I’ve compared Friday’s dramatic plunge to Japan’s sneak attack on Pearl Harbor. Thanksgiving Friday was supposed to be a quiet day on Wall Street, but it looked more like the possible start of the bear market we’ve long expected. The selloff generated a powerful impulse leg on the daily chart, although it did no damage whatsoever to the weekly. We’ll keep that in mind lest permabear hubris dull our judgment in the weeks ahead. It would not be unusual for a major trend change to occur after the trend has fallen shy of an important Hidden Pivot target.  The current trend failure occurred at 4740, a not insignificant 20 points below a 4760 target we’d culled from a pattern tracing back to 2009. There needn’t be any guesswork, however; we’ll know what’s on Mr. Market’s mind by paying close attention to corrective patterns on the hourly chart. If they start exceeding their D targets routinely, that would add to the evidence that a major bear has commenced. The same goes for retracement rallies that fail to reach their ‘d’ targets, particularly if they sputter out at the p ‘midpoint’ resistance.  On the hourly chart, here’s a good place to start, since it shows Friday’s close to have occurred bearishly beneath p=4583. ______ UPDATE (Nov 30, 5:40 p.m.): Omicron is not what is causing stocks to fall, although a nascent bear market might be. If so, expect more carnage, but then a lulu-of-a-bear rally to suck everyone in and exhaust short-covering. The ostensible reason for the rally will be the debunking of  Omicron’s supposed threat to humanity. This ‘variant’ and any vaccine said to cure it are a bad joke, actually, and most of us have grown much too tired of Fauci hokum to believe it, let alone adjust our lives to it yet again. Europe’s supposed swing to full-on socialism with mask mandates is just business as usual if it happens at all, and you needn’t get all worked up about that prospect, either. Tune out the punditry as well, since the hacks who purport to tell us why the markets do what they do are like journalism teachers who have never filed an actual story. ______ UPDATE (Dec 1, 6:38 p.m.): We’ve got this pattern, with a 4478.75 downside target, all to ourselves, since it is as obscure and gnarly as they come. Use it for any purpose, including getting short ‘mechanically’ or bottom-fishing with confidence. The demolition of p=4564.75 support late in the session implies there is the usual 106% chance that D will be hit, possibly before Thursday’s opening. _______ UPDATE (Dec 2, 10:45 p.m.): As vicious as today’s short-squeeze was, I’m not throwing in the towel on the 4478.75 target. A rise to the green line (4607.75) would trigger a ‘mechanical’ short, but because it’s bound to occur three nanoseconds before the closing bell, I am not recommending the trade. If it happens early in the session, though, and you know how to ‘camo’ the entry risk down to around $200-$250 per contract, then go for it.