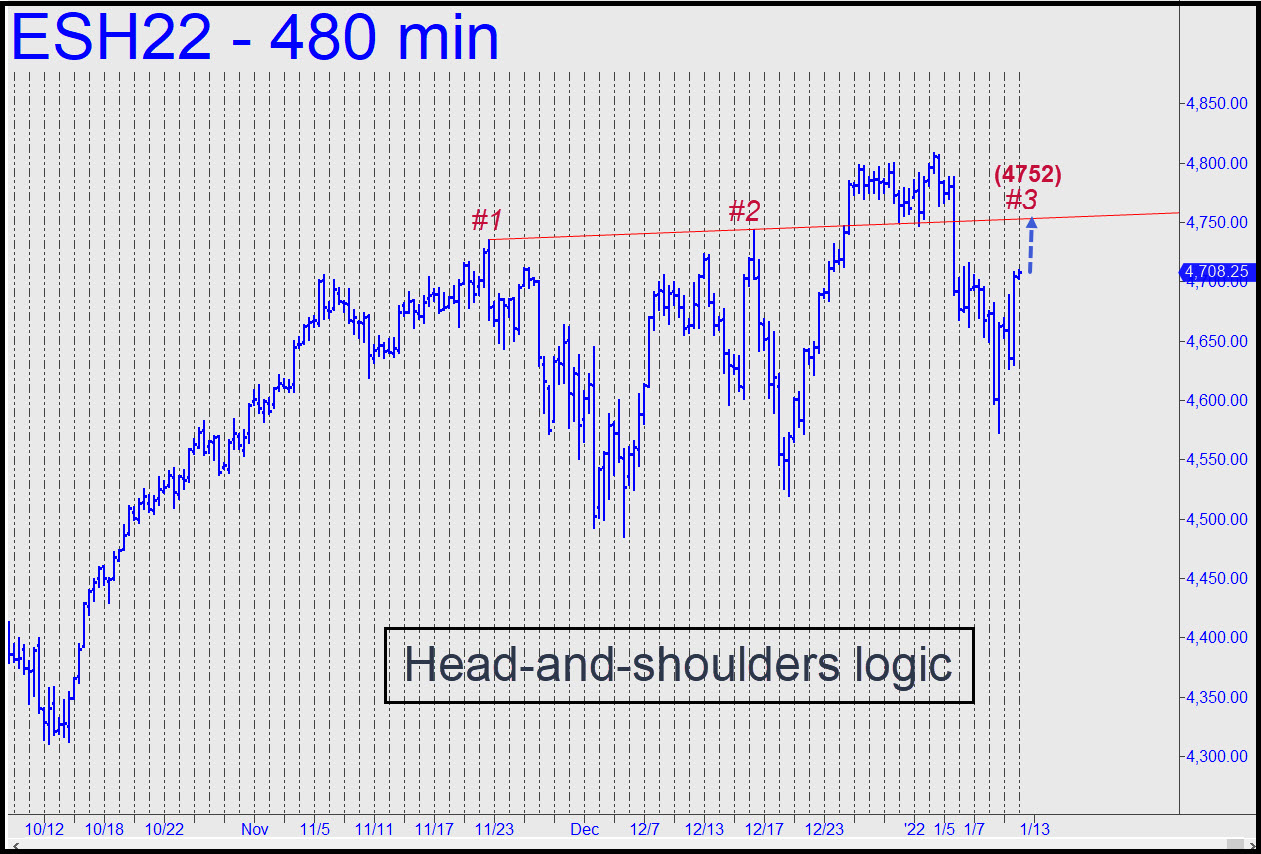 The supply-and-demand logic of the chart shown predicts a potentially important top at 4752.00. This is not a Hidden Pivot resistance, but rather a price along a trendline that explains itself. The very gentle slope of the line is determined by two peaks where anyone who bought got crushed by what happened next. All of these losers have been praying for the last month or so to get out ‘even’, and they may just get their wish. But I doubt they’ll come away with much of a profit, since there’s a dome of copious supply just above the line (which can be shorted with a stop-loss as tight as you can handle.) There is no way buyers will get past the trendline on the first try, and if their efforts continue for a few more weeks, that would eventually create a head-and-shoulders pattern.  It would require perhaps 20-25 days to accomplish this, assuming the right shoulder develops with the symmetry common to H&S formations. The foregoing doesn’t negate the 4907.75 bull-market target I’ve been drum-rolling here for quite a while, but it does give us a more modest objective that could prevent an important downturn from somewhere shy of 4907.75 from catching us unawares. _______ UPDATE (Jan 13, 6:43 p.m.): We got chumped out of an enticing short when buyers failed to push this hoax up to the trendline. The line seems too eclectic to have been front-run, but we’ll never know for sure. There’s still tons of resistance there in any event, so we’ll have to figure out another way to get short if and when the futures rally back up to the line. In the meantime, I expect a tradeable bounce from very close to p=4631.75 in this chart to confirm the pattern and its 4524.00 downside target. Let’s see how sellers interact with these ‘hidden’ supports before we try to determine whether bears are starting a major offensive. _______ UPDATE (Jan 14, 8:46 a.m.): Sellers have trashed p=4631.75 this morning ahead of the opening, implying weakness is growing. Still, don’t underestimate DaBoyz, who are running the same scam they use every day in AAPL — i.e., taking index futures down to a low where sellers have exhausted themselves before or shortly after the regular session begins. The short-squeeze bounce this tactic is likely to create in the first half of the session should be shorted, albeit carefully. Whatever happens as the week draws to  a close, I very strongly doubt that DaSleazeballs will be able to fake buoyancy when stocks resume trading on Sunday evening.