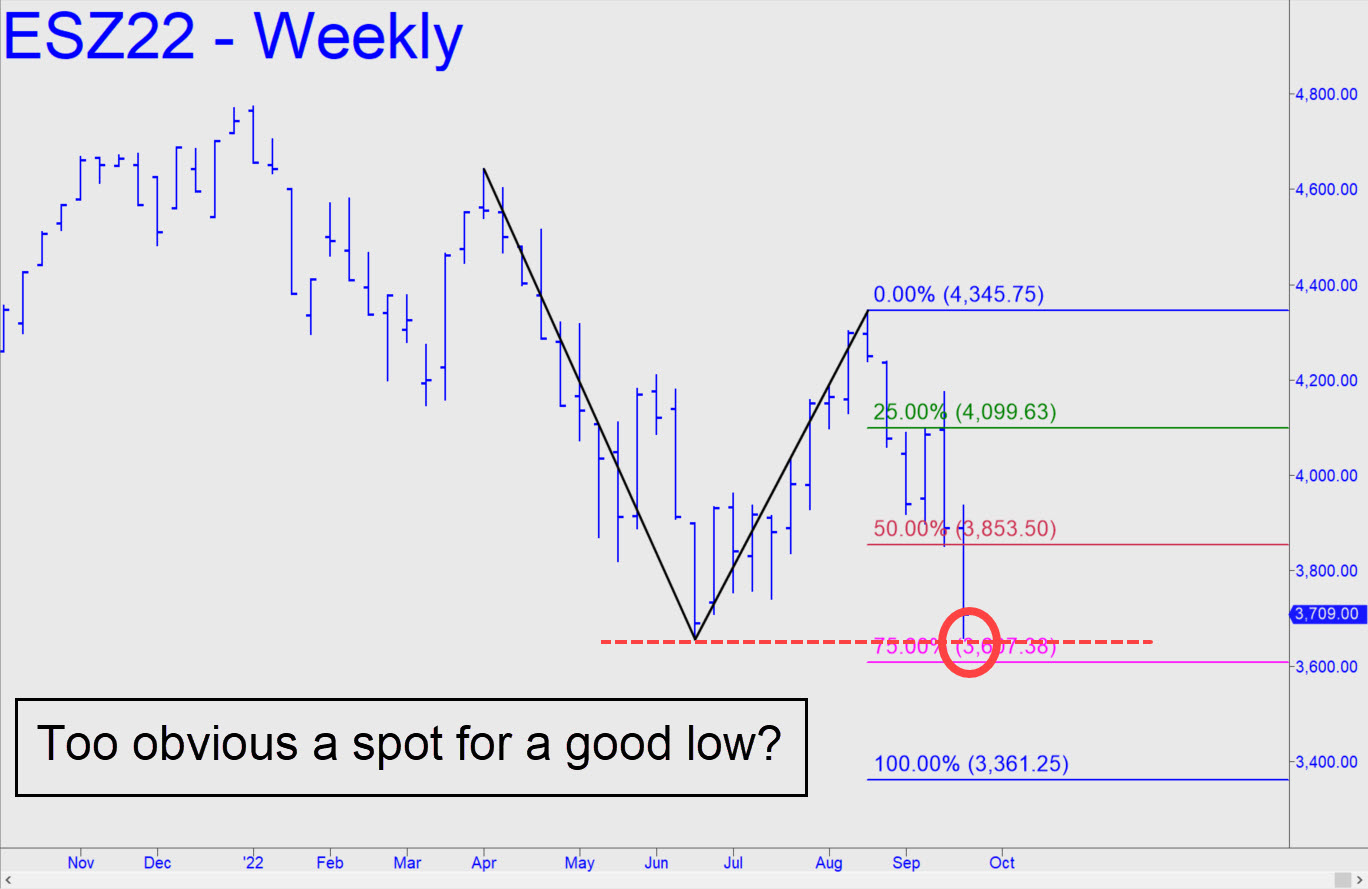 Only in a child’s fairy tale book — a punitively boring fairy tale book, to be sure — would the December contract have made a major bottom three points above the June low as could conceivably have occurred on Friday.  A more painful test of the low will likely be required, implying it will have to be breached, even if only to rebuke Jim Cramer and frighten the large TV audience that would have taken him literally when he guaranteed a couple of months ago that June’s 3657.00 bottom would stand more or less forever.  Unfortunately for his fan club, based on the way the downtrend crushed the midpoint support at 3853.50 last week, I would expect the futures to fall to at least p2=3607.38 before they can turn around, or more likely to D=3361.25.

This is somewhat at odds with the bullish glimmer of hope for the S&Ps that I’ve provided elsewhere on the page in my analysis of the Dollar Index (DXY). On Friday, it precisely achieved an important rally target that has been 13 years in coming. If the dollar is therefore about to enter a corrective phase, it seems logical that just about everything else will reverse and move higher. That’s because for months nearly everything has fallen in lock-step with the dollar’s rise. The inverse relationship is so tight that it can be seen even in intraday feints, jiggles and jaggles. We should know by later in the week whether the relationship will hold, so stay tuned. _______ UPDATE (Sep 27, 5:18 p.m.): I still like the prospect of a (very) tradeable bottom at 3607.38, the minimum downside target we’ve been using, but I’d have to concede that it’s possible the turn will come from today’s low, 3635.25, for reasons this chart makes clear. It uses a not very appetizing but still viable one-off ‘A’ instead of the marquee ‘A’ shown in the original, thumbnail chart. ______ UPDATE (Sep 28, 10:17 p.m.); The actual turn came from 3613.00 at 5:25 a.m., putting bottom-fishing just out of my reach. I see the short squeeze sputtering out somewhere between here and Sep 21’s peak at 3925, but I’ll wait till it get within 20 or so points of that number before I get in its way aggressively. ______ UPDATE (Sep 29, 11:35): DaBoyz are learning the hard way, just as we are. By now they must be starting to realize that for a market so oversold, short squeeze rallies are sputtering out more quickly than we might have imagined a few weeks ago. This one got nowhere near the level where’ I’d wanted to get short, so look out below. Its glaring failure to spook bears for more than a few hours could cause the downtrend to accelerate in the days ahead.