The People’s State of the Union

[So deep and pervasive are the economic lies in which we have all become immersed that few even question how the U.S. economy could be recovering when its foundations are rotted beyond remedy or repair.  A solution is at hand nonetheless, says Rick’s Picks contributor and forum regular Rich Cash, but it’s not going to come from the politicians or the Fed; rather, it will be punitively imposed on us by the collapse of a debt pyramid that as of this moment has placed a very real liability of $178,311 on every man, woman and child in America. Below, we give Rich free rein to say what cannot be said in a State of the Union speech – to say that the nation will not emerge from its long wallow until we face up to some hard economic truths. RA]

235 years after the first Declaration of Independence, a Revolution founded on the highest Constitutional principles of liberty and general welfare is well overdue according to Thomas Jefferson, who figured a revolution every twenty years was healthy for our Republic…

We the People hereby declare…

One definition of insanity is renominating to high office the same candidates and their friends representing special interests from both sides of the aisle, yet expecting different results. In January 2011, the usual suspects, some dating from the Nixon Administration and Vietnam War, began to throw their hats into the media-circus ring. It is finally time for fundamental reform, not just another quickie brand label or slogan change. A conspiracy of special revolving-door interests enriched themselves running this country into bankruptcy facing insolvency. We the people are on red alert. It is high time for real reform and repeal of white collar military Crime without Punishment. A passel of crooks took over Wall Street and Washington, D.C.  They took the majority of people to the cleaners and poorhouse, marketing moral hazard. Now generations face a dismal poor future; unpayable debts as far as the eye can see. 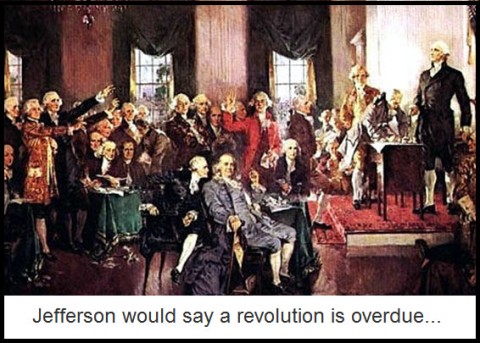 There is no way government can grow or inflate its way out of this musical chairs mess by more borrowing, spending and taxing on a shrinking real economy. In the past two years, all the Federal debt in the history of the Union doubled.  Debt cannot double again because real economy and debt service were broken by government- and Wall Street-on-steroids with mark to fantasy gimmicks and special secret accounts.  One percent of the world owns 90 percent of the wealth. Much of it was financed by a banking taxation system based on debt that destroyed the majority of hard-working, law-abiding citizens with usury and hidden pay cuts and taxes.

So far, the failed system attempted to fix itself by creating yet more debts and not-so-hidden taxes, plus 8%-plus inflation of education, food, fuel, medical care, utilities and other necessities. This does not work. True economic politics consists of not merely gazing at short-term benefits for some, but long-term effects for all. Every Sunday School Child knows we can’t get to heaven on the highway to hell. America, one of the last bastions of freedom and prosperity in the world, was forced by money-trust interests to export her prosperity and productive work, while destroying family, importing and subsidizing illegals with a lower living standard, while making war breaking things, shooting, jailing and killing people.

No wonder the overstretched dollar fell from $20 an ounce of gold to $1430.60, a -98.6% drop in the value of the dollar. If Wall Street Machiavellians have their way, revaluing the Chinese renminbi/yuan +40% to Big Mac Productive Purchasing Parity with the dollar to boost exports will deliver the final coup d’etat to the American Consumer as the dollar drops another -40% and prices soar on the other side of the seesaw, even though American workers are much more productive than Chinese per capita. We do not confuse quantity with quality. In theory, revaluing the Yuan would seem to generate windfall profits for multinational cash-rich corporations that pay less than 10% of American taxes, but who here could afford to buy their products?  Certainly not American, Chinese or Indian debt slaves or feudal peasants.  Already, with 29.78% of the workforce defacto unemployed, food companies raised their prices, an unpopular form of austerity. Can consumer-product price hikes and $4 gasoline be far behind?

Boeing celebrated their $19 Billion technology transfer D.C. Hu Wall Street deal with China by announcing the layoff of 1100 more employees, creating yet more wards of the State. Meanwhile, China arms herself to project power and keeps American businesses out as Japan did in 1989. Corporate government did neither God’s work nor faithfully served the public commonweal. Thirty three years ago a President with a degree in economics campaigned and won office with votes from both sides of the aisle by telling the majority, More government is not the solution, but the problem. He got the most votes by guaranteeing to get government off taxpayer backs and out of our pockets. He cut red tape and taxes and fired a government union on illegal strike. He faced down foreign threats by rearming American military strength while refusing, per Washington’s Farewell Address, to get bogged down in foreign entanglements and military misadventures.

His biggest mistake was listening to people who claimed more debts don’t matter. He doubled the debts, which made interest rates rise with an old-fashioned banker and Treasurer who did not bail out every bad bank, company or investment with funny fiat money.  He stayed the course through tough times instead of throwing taxpayer money to friends. By letting interest rates rise to 18% money with 28% second mortgages, he cleared the economic playing field of detritus, flotsam and jetsam with bankruptcy or rational reorganization.  He paved the way for profitable investments by savers that created more productive jobs and economic growth (8% GDP) than all Presidents since.

Thirty-three years later, we face the bankruptcy of America and her taxpayers, perhaps an upside-down Federal central bank and Treasury, with falling tax revenues and rising red tape and taxes. The predictable political turf response so far was to increase bureaucracy and print more money and new laws and rules for government takeover of the economy, with ineconomic oxymoron legislative acts and legal decisions like Food Safety, HAMP, Health Care, Patriot Act, TARP.  Along the way, America, Home of the Brave and Land of the Free, became a Birther Truther Prison State, more people incarcerated than any other nation, including Red China, with benefits, pensions and wages cut, while the number of billionaires soared.

Wall Street became a gambling casino instead of a source for productive capital. A leading investment house made a social software firm without notable profits priced more than larger firms employing far more people productively and profitably, then pulled American investors out of the pie. In the financial world half a century ago, I worked hard for silver dollars at parity, then worked with a main line Wall Street Wire House Firm and Investment Banker in Silicon Valley, funding a fast-growing medical device business eventually acquired and taken private for $11 billion. Nowadays red tape, lack of capital and the culture of cupidity could derail such productive enterprise.

Never fear – there is a solution coming. It is not more bailouts with funny money and taxes, administrative legislative judicial edicts or domestic espionage red tape, or technology transfer to mercantile competitors who practice free unfair trade with child slave labor and prison camp organ harvesting of political enemies. How can some misguided American mouthpieces extol a communist totalitarian culture? What remains of pummeled American free markets is rising rates and lowering real paper asset prices, like the 16 lost years from 1966-1982, or 25 lost years from 1929 to 1954. While painful, these ultimately cleanse our markets of government excess and restore productive liberty with economy.

This solution may be coming quickly. These past five weeks we had a second series of Hindenburg Omens since the Chicken Little August Hindenburg series that presaged a mere -8% market decline, truncated for awhile by Fed Funny Money and Election Year spending. With Elections over, a fresh House slate sweeping clean and inflation choking markets, there may be actual spending cuts with legislative repeals, or two years of stalemate, amidst pomp, circumstance and austerity, but it does not matter. Declining markets do the heavy lifting as they always do. Neither POMO nor Government Trees can grow to the sky as much as they try. Inflation kills the best-laid plans of mice and men. The old hands in the Senate saw the writing on the economic wall, losing or resigning in record proportions. Perhaps some even fear pending backlash with congressional criminal procedures for embezzlement or war crimes.

Where are those missing tens of trillions? Our sense, after five decades in the markets, including the Reagan Task Force, is that the economic stage is set for some real political reform by a deleveraging paper chase to the bottom. We think it quite possible over the coming two years of correcting excess, that a billboard internet libertarian marginalized neighbor poster word of mouth Presidential Candidate may finally catch the fancy and votes of the majority of Americans to restore Constitutional liberties with the rule of justice to protect lives, prosperity and the general welfare, not special interests. A few popular $10 a donor internet fundraising bombs like before and he’s in the Oval Office delivering sanity to government.

Catch him Friday on infowars.com. In the meantime, the real $64 Trillion dollar question may be exactly where to best put our savings to protect it until economy and sanity return sometime ahead. Dollar-cost-averaging a leading energy company like Exxon Mobil could make dollars and cents, as it already did for those who averaged down to 55 suddenly last summer. XOM is currently targeting a reasonable +53% with a dividend that grew at a 9% rate the last five years ahead of the cost of living. In this world of pension defaults and contract deleveraging, select tax-exempt quality credits with monthly yields approaching 8% annual are currently available. One California example is NUC, targeting an unusual +157% at current prices. The dollar is a contrary crazy idea unless world trade falls off with higher prices and expatriated money comes back home with tax cuts to the good old USA to roost. Inflation sows the seeds of deflation. The dollar is currently targeting an unusual +46% from current prices.

Finally, for those who prefer money without counterparty risk, a monthly, quarterly, annual or lifetime dollar-cost averaging program with Silver American Eagles or a safe American silver stock could make dollars and sense to store value. While silver declines with industrial contraction, that did not stop it from hitting $50 in 1980 when the economy was punk.  Warren Buffett, Bill Gates, Charlie Munger, Ron Paul, Paul Revere, Carlos Slim, George Soros and the Founding Fathers had a good idea with a silver lining.

These are some ideas, not recommendations. They may not be suitable for all individuals or accounts. I am not looking for any more accounts, business or clients!

Rich Cash worked the better part of a decade with Merrill Lynch, taught Specials at Stanford University half a decade by Academic Senate Appointment, founded Stanford Capital Investment Banking, and wrote works like Options and Other Beasts, The Politics of Prosperity, for student and client circulation on mostly relevant or timely investment themes.  You can e-mail him by clicking here.