[Egypt veered toward civil breakdown yesterday as protests turned violent following a speech by President Hosni Mubarak that took a hard line against demonstrators’ demands.  Following is a timely commentary from Cam Fitzgerald, a frequent contributor to Rick’s Picks and the readers’ forum.  RA]

It really is very unfortunate what has transpired in Egypt over the past few hours. The country has abruptly lurched from a peaceful populist uprising against a despised leader and into the makings of civil war within hours of Mubarak’s speech to his countrymen. This is not a big surprise. The leaders of the uprising had demanded nothing less than Mubarak’s immediate ouster. They painted themselves into a corner with a demand that was sure not to be met. When Mubarak subsequently stated that he will stay on for nine more months, the balance of his term,  AND seek to arrest those that were responsible for the instability, arson of buildings and vehicles etcetera, Egyptians everywhere knew instantly that the seeds were sown for an explosive outcome in the words of his speech. 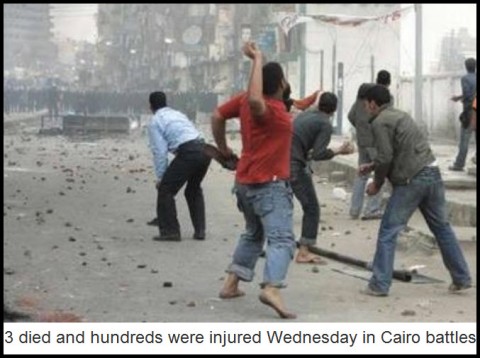 Mubarak said exactly what was guaranteed to make the protesters as uncomfortable as possible. Their worst fears materialized instantly. The much hated leader basically told them he would stick around to pay back those who stood up against him. His words were a clear threat and a recipe for disaster, as every Egyptian heard exactly what was really encoded in his message. I just shook my head in disbelief as I listened to the “analysis of the moment” by one of the media talking heads as she spun the speech in a positive way to leave the impression that Mubarak was an honourable leader who had worked hard to serve his country. Indeed, Mr. Mubarak himself stated that he had “exhausted his life” in his work on behalf of the country. What he meant to say was “he had exhausted the treasury,” but that would have been far too blunt.

Unsurprisingly, coverage by the U.S. news media overlooked some of the specific reasons why Egyptians are so angry at Mubarak. Do they not know that his personal fortune is estimated to be somewhere in the range of $40 billion. Does anyone think he made all that money honestly? What that $40 billion really represents, from the perspective of most Egyptians, is plain-vanilla theft. Of course, here in North America we know better. The U.S. bought Mubarak’s loyalty and 30 years of peace in the Middle East, and his wealth in fact represents roughly half of all the U.S. dollar contributions to Egypt over the time he has held power. Naturally this leaves a bad taste in some people’s mouths. Just the idea that he might now secure that wealth and be able to shift his money out of the country over the remaining months of his term is poison to Egyptians. The fact that he will try to exact revenge on his opponents at the same time he secures his fortune is insanity to his opposition and totally untenable to the protesters. Riots were the only possible outcome.

The country is now in turmoil, with protesters turning against one another. This is the expected outcome. It is an effective strategy of the government as it takes the pressure off the president for the moment. Here we have a classic divide and conquer strategy. Chaos and anarchy are breaking out in place of the very focused energy of the revolt, as the anger has instead been diffused into neighbourhood feuds and personal conflicts as pro- and anti-government forces clash, unleashing all their anger and waging war on one another instead of against the president.  Do not suppose for even a moment that Mubarak is not a tactician, strategist and a true warrior at heart. This final act of his was scripted beautifully from his perspective and the 90% of his populace that never participated in the uprising will now be calling for the military to crush the nascent revolt before the nation is totally destroyed by the fighting. It is unlikely that this will end in anything other than bloodshed and riots as the military is finally forced to intervene.

As it is, Egyptians already blame the US administration and other Western nations for not having been more supportive of the protesters and not having taken a firmer stand against Mubarak while demanding that he step down. How much more resentful will they become as their cities turn to smoking ruins while Mubarak continues to cling to power and to his ill-gotten gains? In his speech, as Mubarak was telling his people that he would “die in the land of Egypt,” I heard that one of the protestors immediately quipped that the people were going to give him his wish. The real price Egypt is now paying is not the humiliation of the theft from its treasury by an oppressive and arrogant dictator, but the sudden realization the country is now on the path to a civil war.

A very big price indeed. The Pharaohs must be turning in their graves.