T-Bills May Offer Boomers a ‘Safe’ Way to Lose

[Blogger Robert Moore is a frequent contributor to the Rick’s Picks forum and the author of some of the more provocative guest commentaries we’ve published.  In the essay below, he deconstructs talk by high-level bankers about offering savers a negative rate of return on Treasury Bills.  Robert also explains why, for Baby Boomers in particular, this could have dire consequences. RA]

Well, it’s official: The U.S. government is thinking about becoming a predatory lender. On February 1, the Treasury Borrowing Advisory Committee — a symposium composed mainly of representatives of the cabal of large U.S. banks that are referred to as “Primary Dealers” in Treasury auction-speak — tabled the following, seemingly innocuous, little tidbit: “The question was asked if it made sense for Treasury to permit bids and awards at negative interest rates in marketable Treasury bill auctions. [A Treasury employee] noted that there were operational issues associated with such a rule change, but that the hurdles were not insurmountable.” The Primary Dealers are asking the Treasury if there is a way to allow people to bid more for a Treasury Security than the cash value of the security at maturity. For example, bidding $105 for a Treasury Bill that you know will be redeemable for only $100 from the Treasury at maturity.

Many financial newsletter writers and mainstream media analysts will probably infer from this development that the market expectation is for more future deflation (declining money supplies and therefore decreasing general price levels), while traders will salivate at the prospect of higher speculative gains to be made on T-Bills that can be unloaded later at higher prices when the “greater fool” comes along. But what would this development mean for the individual long-term investor (aka “the greater fool”)?  It would mean, very simply, that they would be agreeing to pay the United States Government a fee to store their cash savings. 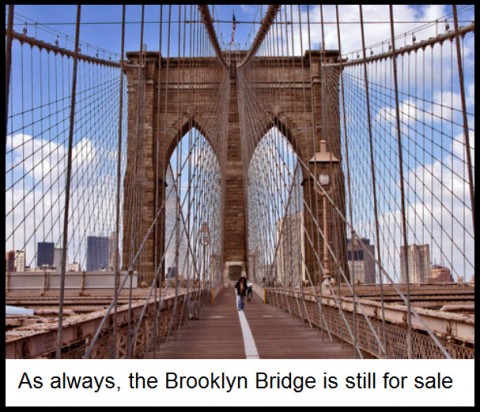 Now, I must point out that even the 0.125% earned interest from a demand deposit account or CD at the local B of A, Chase, or Wells Fargo branch seems better than negative interest, right? I mean, you can preserve 100% par value on your savings (0% interest) by simply stuffing cash in your mattress. Why on Earth would it make sense to willingly surrender the value (aka: purchasing power) of your hard-earned savings? This concept is interesting, but I guess it’s not altogether inconceivable. Every day, people choose to bid more for items in Ebay auctions than they could ever hope to re-sell these items for.  Depreciation is a basic capital condition that some people simply choose to ignore. They don’t seem to care what their money is worth, as long as they can preserve some arbitrary balance number on their account that allows them to sleep comfortably. I’m cool with that — ignorance is a basic human right that we are all entitled to. However, I just can’t fathom why people would be willing to purchase a printed piece of paper that guarantees that it will be worth less in the future than it is today when they could just as easily use the funds to go out and buy a Harley Davidson and have a little fun on weekends while their asset declines in value. But hey, whatever floats your boat (Oh, yeah: Why not just buy a boat?).

Taking this line of thinking to its logical conclusion merely adds credence to my already well-formed point of view that general and widespread financial illiteracy is a basic component of societal strife and widespread economic decline, despite anything Keynesian economists might declare to the contrary. So, I continued reading, and it got even more interesting:  “It was the unanimous view of the committee (again: the Primary Dealer banks) that Treasury should modify auction regulations to permit negative rate bidding and awards in Treasury bill auctions as soon as feasible.”

Hmmm…. as soon as feasible… that got me wondering why. U.S. Treasury Bills are in an undeniable bull market from a global demand perspective. Since the world ended in 2008, the liquidity in the U.S. Treasury market has drawn global investors like moths to a flame; and so, the ability to let people bid whatever they want for these very artistically decorated and official-looking pieces of paper seems like a no-brainer. But there is another, more unseemly and potentially insidious, aspect to this: The huge Baby Boomer cohort is moving into the Treasury market en masse as they enter their retirement years. This gives me pause and causes some concern: Why would a generation of 60-something Americans agree to trade their printed Federal Reserve Notes for printed Treasury Bills that are guaranteed to lose money? My fear is that they simply wouldn’t realize it was happening. Moving out of stocks and into Treasuries is simply “what you’re supposed to do” in your golden years, and I fear that today’s retirees are simply singing to the same sheet music that their parents did; or worse, they are taking their guidance from some clueless Financial Advisor who is charging them a fee to advise them to pay the government another fee to “protect” their savings.

The tag-line for this sales pitch is already well-formed:  “US Treasuries are the safest, most secure place to place your money, since they are backed by the full faith and credit of the United States Government” More troubling is that the “Advisors” might be working for the very banks that are pressuring the Treasury to allow this nefarious practice, so that the banks can take down the Treasury auctions themselves, re-sell the Bills to the retirees at a profit, and pocket the difference in the purchase price, as well as the depreciation of the par value of the Bill, all for themselves. Primary Dealers have already been doing this in the Bond market for 3+ years with the Federal Reserve as their counterparty (the Fed has been purchasing an increasing amount of new Treasury issuance from the dealer banks within two weeks of each new auction); but now they stand to break into the piggy banks of a whole new set of “surrogates” for the Federal Reserve – i.e., retirees.

The idea that these “counterparties” might be willingly (if unknowingly) entering into these predatory (as opposed to being merely parasitic) relationships sickens me; until I remind myself, yet again, that general and widespread financial illiteracy is a basic component of societal strife and widespread economic decline, despite anything Keynesian economists might declare to the contrary. Seemingly, the Mogambo Guru whose work has been featured in The Daily Reckoning, is spot-on: We’re freaking doomed! From a market-analysis perspective, the ability to price inverted yield Treasury Bills into the market will certainly give the Treasury Bull market room to run higher. However, the flip side of this will be the ability of commodity bulls (especially those commodities that compete as forms of savings) to continue charging as well; since the myriad of people who once declared that Gold is a stupid savings vehicle because it pays no income and requires storage and maintenance costs will slowly begin to figure out that the exact same conditions now exist with “safer” U.S. Treasurys as well.

Protect yourself. The greatest weapon you have to fight this financial mass-psychosis is information; but you have got to know how to wield this weapon or it will be turned against you.  Remember: This is all a big game, and the global banks are playing to win. If you choose not to play, then you will be partying with the losers after it’s over.