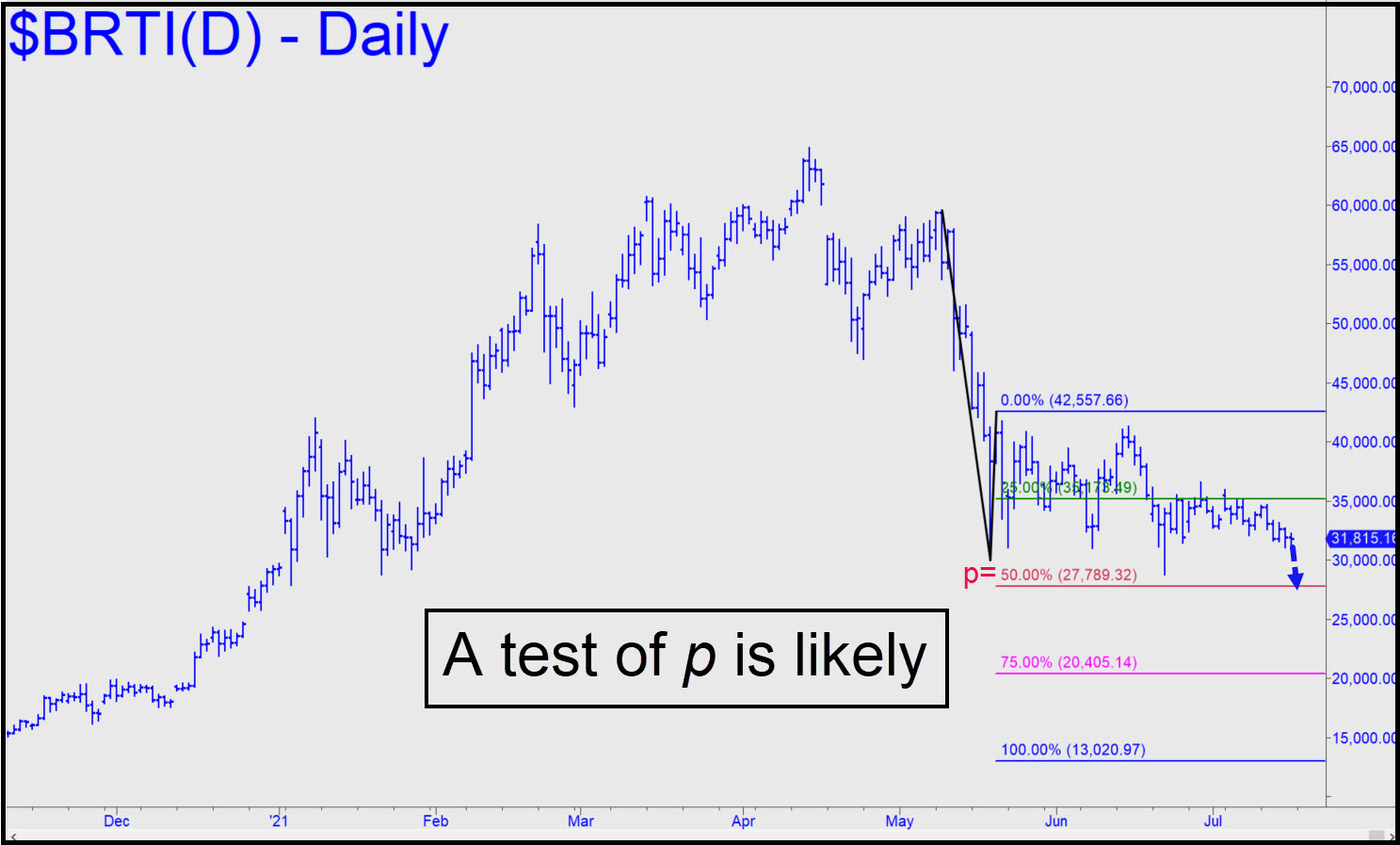 Bitcoin’s fat-cat sponsors show no eagerness to let it fall, perhaps because they are loaded up to the gills already and don’t want more even at ‘bargain’ prices.  A test of support at the red line, a midpoint Hidden Pivot at p=27,789, seems likely in any event, and anyone who trades this rabid badger should plan on bottom-fishing there with whatever flavor of ‘camouflage’ feels comfortable. The tactic itself implies using minor abc patterns to get long or short in places where entry has been signaled on charts of much larger degree. ‘Camouflage’ can be combined with virtually any other trading system you use in order to further reduce entry risk. For information concerning the mini-course on ‘camouflage’ set-ups, click here. _______ UPDATE (Jul 21, 12:43 p.m. ET): Buyers have pushed past a minor midpoint resistance, so I’ve switched to a pattern of larger degree with a 34,335 target where p=31,820. The pattern shows promise if you want to get long ‘mechanically’ on a nasty swoon.  Here’s the chart. _______ UPDATE (Jul 27, 12:51 a.m.): Bitcoin has rallied opportunistically through a no-supply zone extending up to around 40,000, but it will face real sellers from here on up — all losers from the last run-up. The short squeeze tells us that bitcoins handlers are every bit as skillful and vicious as the best and brightest at Goldman, JP Morgan and Morgan Stanley. (Actually, they are all bitcoin stakeholders themselves.) In mere hours on Sunday, when most sellers were on the beach, a rally snatched back every penny anyone who had been patiently short for the last month would have made. This will effectively neutralize bears, putting fear in their hearts when DaBoyz decide it’s time to take BTC again to new record highs. ______ UPDATE (Jul 27, 9:28 p.m.): Use p=40,963 shown in this chart as a minimum upside target for now. If Bertie (Wooster?) blows through it, that would imply DaBoyz are fixing to take it up to D=44,953.