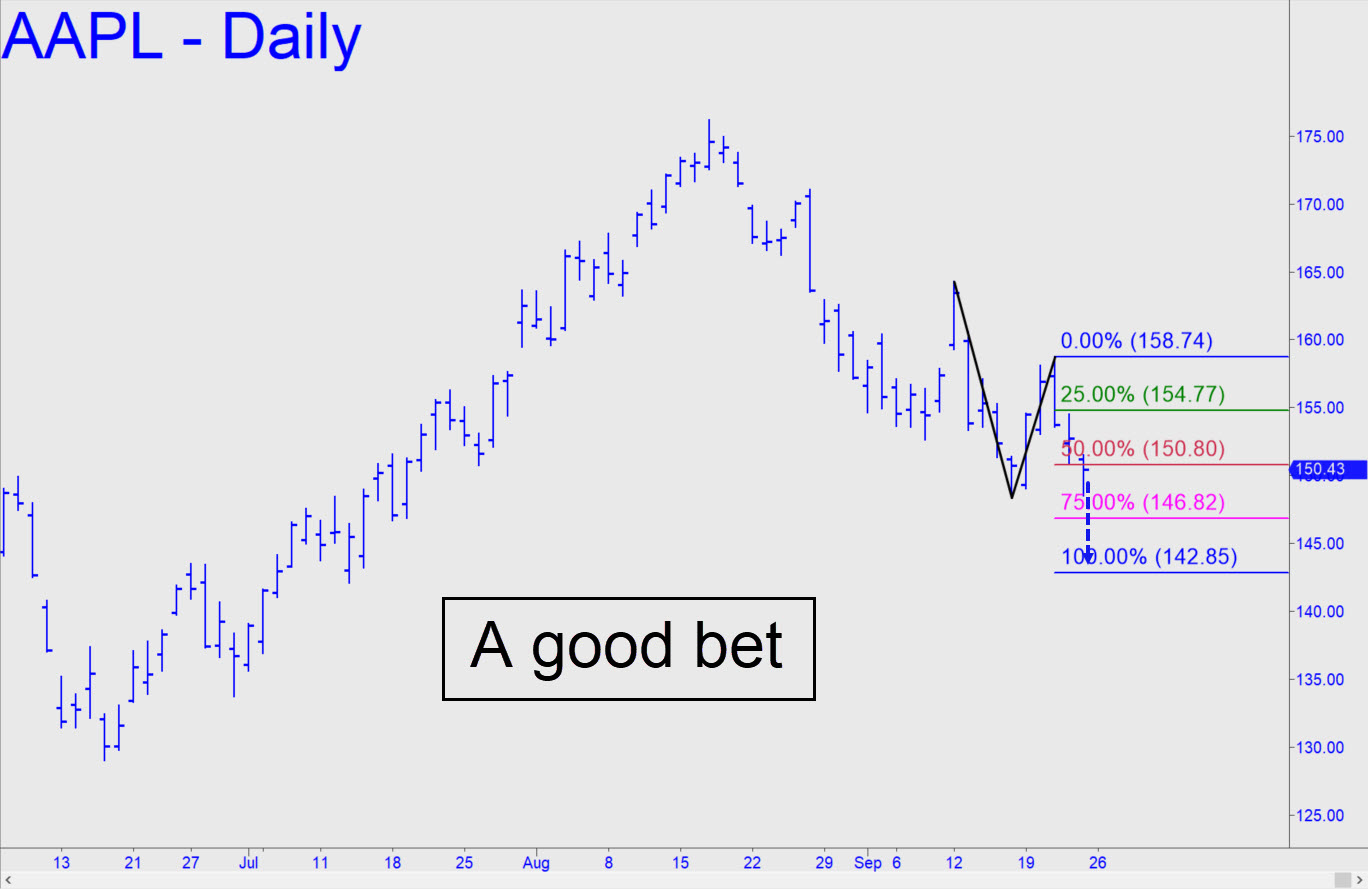 Friday’s close beneath p=150.80 has shortened the odds that the 142.85 target we’ve been using as a worst-case number for the near term will be achieved.  A further fall to at least p2=146.82 appears likely in the meantime, while a rally to p=154.77 should be used to get short ‘mechanically’.  I will provide more-detailed guidance in the chat room if prompted by your timely interest. If the trade were to be executed conventionally rather than with a ‘camouflage’ trigger, this gambit carries about $1600 of implied entry risk, based on four round lots and a stop-loss just above ‘C’ at 158.75. ______ UPDATE (Sep 27, 5:09 p.m.): The short I explicitly advised above would have been worth at least $1500 to any subscriber who did as suggested. The stage-managed, powerful short squeeze on the opening bar fell a nickel shy of p=154.77, but in practice that would not have made a difference if you used the usual reverse-pattern trigger. The bearish pattern has been working perfectly and the 142.85 target still obtains. ______ UPDATE (Sep 28, 10:22): A further rally to the green line (x=154.84) would trigger a moderately appealing ‘mechanical’ short, but if it’s hit soon we’ll want to be cautious about intercepting such a wicked spike. _____ UPDATE (Sep 29, 11:49 p.m.): We saw yet more evidence today that the stock’s handlers have not yet acclimated to the fierce selling that is sinking their favorite stock. This morning they tried a trick they’ve repeated successfully many scores of times, pulling their bids on the opening bar in order to dry up the selling. This tried-and-true tactic succeeded briefly, but only because the 142.85 Hidden Pivot support given above precisely contained the initial plunge. But it gave way after a couple of hours under a barrage of selling, and even a short-squeeze rally in the final 30 minutes could not lift the stock above the pivot. This is bearish, but we’ll move to the sidelines in any event as DaBoyz do their utmost to keep AAPL from looking like a loser as the week draws to a close.