A Muni-Bond Bull Gets the Final Word, Sort of…

(Our good friend Doug B., The World’s Smartest Financial Advisor as far as we’re concerned, is still bullish as all get-out on muni bonds, notwithstanding the swipe we took at them last week in a commentary entitled “Muni Bond Yields Are Pumped for a Reason.” Doug says a perfect storm of bad news brought bond prices down to levels where an investor would have to have been crazy to pass them up. He also thinks fears of widespread defaults by strapped cities are overblown. For some outside-of-the-box thinking, read his aggressively contrarian commentary below — and then, dear forum readers, if you disagree, don’t pull your punches.  Oh, and one more thing: Before you start reading, click here to sign up for January 18’s free demonstration, “A Hidden Pivot Analysis of Two Promising Stocks for 2011.)

“I want to clarify a few things for you and your readers about my Muni Bond Buy. First, I am buying garden variety leveraged closed-end muni funds, managed mostly by Blackrock, Invesco/VanKampen and Nuveen. The funds contain mostly (85% plus) investment grade long term issues and the 7.5% yields are a function of leverage and modest (4-6%) discounts to NAV. They contain everything from GOs, Revs, Escrowed, tobacco, hospital, etc. I am placing some measure of confidence on the credit analysis capabilities of the managers. But the motivation for the purchase was not some big macro optimism on municipal balance sheet repair. It was because these funds got crushed overnight in November when it became clear that a flood of new supply was going to be crammed into year-end due to the likelihood that the Build America Bond Program would not be renewed for 2011 following the Republican landslide. The specter of huge supply ran straight into the most negative sentiment for bonds in years. Along with the price decline, the conventional wisdom that problems with Municipal Balance Sheets, previously unknown by the investing public and their advisors, suddenly appeared and were unsolvable. This is just like what happened into year-end 2008, but of lesser magnitude. In the first few months of 2009, the funds appreciated 40% – 50% as the supply/demand imbalance moderated. In late 2008, we bought them at 12% discounts and 11% yields. 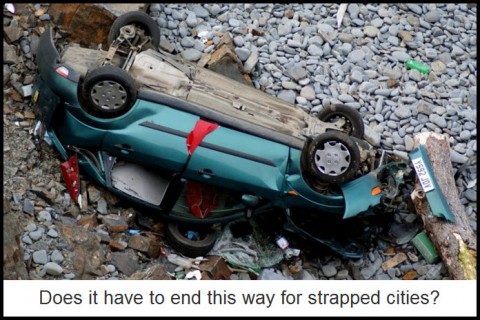 “Needless to say, concerns about municipal default are not new, just popular among an angry society. I admit that I think that we have reached a secular inflection point in the great credit expansion/bubble that began in 1938 and ended in 2007. I expect that households and government alike will not drive the Thunderbird off the cliff into the Banana Republic. The behavioral and political changes have arrived with a bullet, but, to quote Bob Farrell, “in the early stages of a new secular paradigm, most market participants are playing by the old rules, while the markets are adapting to a new set of rules.” It seems clear that Municipal Government has killed the golden goose. As has the Federal Government. The new set of rules is Chris Christie and the Tea Party. Solutions will be found and they will be deflationary. Lay off government employees and normalize the compensation of the remaining ones to the private sector. Terminate defined benefit plans and replace them with 401Ks like the rest of us pay for. Impose payroll taxes and out of pocket costs for health care premiums. I pay them. Why shouldn’t the firemen who are left? We know it’s coming, but we can’t believe it will prevent Armageddon. It will. There is nothing linear in the universe.

“It reminds me of trying to explain in mid-2008 why oil at $140 was headed to $30. I must be an idiot. You were there. Nobody could get past the idea that “we’re not crushing any more dinosaurs, and everyone in China is going to the drive-in.” Give me a break. OPEC opened the valve, Harvard Endowment reallocated and some guys at Devon figured out directional drilling in natural gas-laden shale. We’ll see $25 per barrel before it’s over. By the way, how is oil priced in gold these days?  Back in 2000 at the lows, I think it was 10 barrels per ounce. Now it is about 14. And oil has rebounded from $33 to $90 in its “b” wave. Food for thought.

“In a recent interview on 60 Minutes, Wall Street analyst Meredith Whitney recently asserted that we will soon see hundreds of municipal defaults representing hundreds of billions of dollars. You have to buy that. Even if only for the next 12 months. How long is your investment horizon? The pension and healthcare unfunded liabilities are a long-term budget issue. The vast majority of Municipal Bonds are supported by specific revenue streams and are senior to wages, not to mention pension payments. I’ve heard all the tortured arguments about how legal constructs were made to be broken, but what’s the point? You don’t trash the ability to participate in the financial markets because you need to avoid budget agony. 7.5% tax-free from Government Bonds. What a lousy value! Gold at $1400 (with storage costs) up from $675 in 2008. Now that’s a safe way to make money! I’m not saying that to piss you guys off. Back to the investment horizon. I can see $3000 gold. But probably $1100 first. I don’t know, but it’s overbought and sentiment is wildly bullish. The recovery bulls like it because of inflation and continuing emerging market demand. The fiscal bears love it as a currency. You married your wife. Everything else trades. My friends who love gold are afraid to be out. Set yourself free. By the way, full disclosure: I was up to a whopping 15% position in gold and sold it below $1200 in November 2009. But it does look like a double top in October-November and it is losing momentum. If I was smart enough to have ALL of my money in it until today, I would sell a little and buy some Munis.”