A Noted Fellationist Is on America’s Mind

For securities traders who take their cues from the headlines, we cannot recall a more challenging environment. Do we buy, or do we sell, when the news is obsessively concerned with…Kim Kardashian? Our collective descent into the sordid details of her worthless life is evidently the price we must pay for a slow-news month. Considering the alternative — reading about the latest hairbrained scheme to save Europe — perhaps we should be grateful to the Kardashians?  In any case, we’re stuck with them for now, and we can only hope there is no higher form of intelligence in the universe watching earthly civilization topple head-long into such a deep abyss of prurience. Unfortunately, there is no getting around the shame of it:  America’s most famous – and for all we know, most talented – fellationist has been rewarded beyond a publicity agent’s wildest dreams with a claim on our attention that would surpass that of Jesus were he to return to Earth.  Avoiding further details of her publicity-seeking exploits is enough, almost, to drive one to MSNBC in search of a Kardashian-free zone. 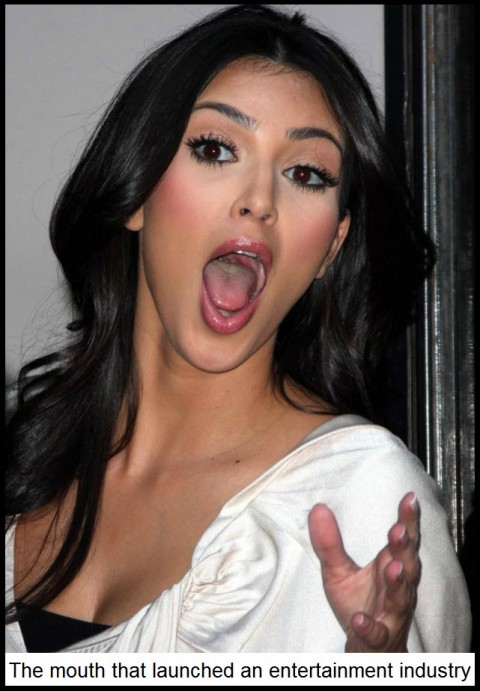 Unsurprisingly, the story-of-the-hour concerning our sloe-eyed, semen-swallowing callipygian lass has spread well beyond the sensation-mongering E!  The otherwise respectable Associated Press, for one, delved yesterday into the question of whether E! should feel any shame over its plan to re-broadcast the wedding even though Kardashian’s summer marriage to pro basketball player Kris Humphries lasted all of 72 days. Shame?  You’ve got to be kidding. Like the fictional Broadway hit “Springtime for Hitler,” Kim’s story is so good-bad that it will probably run forever. The original nuptial broadcast – “Kim’s Fairytale Wedding: A Kardashian Event” – drew the largest audience in the tabloid network’s history, perhaps demonstrating that the jihadists are not entirely wrong in their belief that a hopelessly decadent America deserves to be put out of its misery.

Herman Cain is probably wishing the Kardashians were even more popular, since his is the other story to which America’s three-day attention span has been commanded. The newsmongers seem hell-bent on pretending that we care whether Cain made some sort of “offensive” gesture sixteen years ago. America awaits a demonstration of whatever it is he supposedly did. If we were Cain, we’d recall that we’d simply been picking our nose, or doing a Buster Keaton impression. Regardless of whether he escapes a lynching, it’s going to be a long campaign season.