Rick's work has been featured i

Ready for Your Dollars to Be Canceled?

[This week’s commentary was written by David Isham, a real estate investor from Northern California who has subscribed to Rick’s Picks since its inception more than 20 years ago. RA ]

With the ongoing financial turmoil and the potential start of another world war, gold is behaving as we would expect, showing exceptional strength. Although we are nowhere near the top as open interest is still low, we still must be on the lookout for a short-term top. The gold bull has traditionally carried as few riders higher as possible, and I suspect this time will not be any different. Rick has identified targets above $2,000, and there are two peaks at $2078 where there will be plenty of buy stops for the algos to run and establish short positions.

If they do run the buy-stops, they would then look to attack sell-stops under $1,600 so that they could cover profitably and get long again. A long-term Fibonacci fan (aka ‘speed resistance lines’) with a red 2/3 line has acted as both resistance and support since this bull market started in 2001 and would be a likely target on the downside. Such a dramatic move would also set up a slingshot move to the upside. If we do get one more, dramatic move down I would also expect gold stocks to hold up well relative to physical. My strategy is to accumulate gold and silver mining stocks and not try to time buying and selling my core positions, since I could get left behind if I am wrong about a big drop. However, any large move down would be an opportunity to add to my positions.

Martin Armstrong does not think the US dollar will last beyond 2028. It has the distinction of being the only currency that has never been canceled, meaning if you have a greenback from 1861 it is still legal tender. In a currency reset, all liabilities will be left in the old currency so that the government can print away this debt without affecting the economy. Their liabilities in the new currency would then be wiped out, allowing a ‘fresh’ start.

As an example of what a monetary reset might look like, the government might convert your cash savings into government bonds so that if you have $100,000 in savings, the bank would allow you to convert $20,000 to Central Bank Digital Currency (CBDC) and the remaining $80,000 into government bonds that could not be sold and would continue to drop in value.

Think this is crazy talk? It is exactly what was done in Argentina, where 80% of people’s life savings were converted to the ‘Corralito’ bonds that ended up being worthless. The word Corralito translates to ‘corral’, implying your bonds would be locked up and unable to circulate. If we are lucky our mortgages would still be denominated in depreciating dollars, which might ultimately be good for the little guy once the dust settles.

It’s hard to say who the winners and losers will be when the dollar is finally canceled, so the best approach is to minimize one’s exposure to bonds and diversify into hard assets such as precious metals, real estate, tools, razor blades and anything else that will have tangible value. In a monetary crisis, we are all going to lose, but how badly depends on what you do now to prepare for the crisis.

First Majestic Silver [NYSE: AG], whose chart is shown below, has a textbook, massive rising triangle that measures to $255 CDN. We could conceivably see that target achieved sooner rather than later. 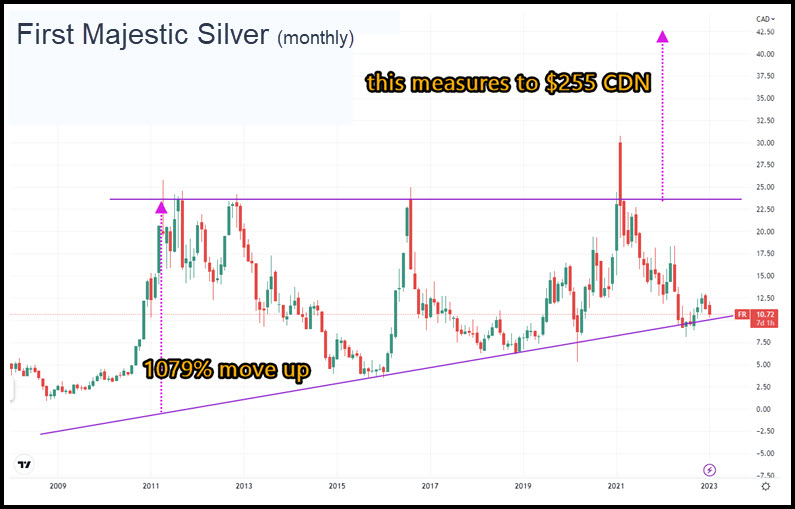 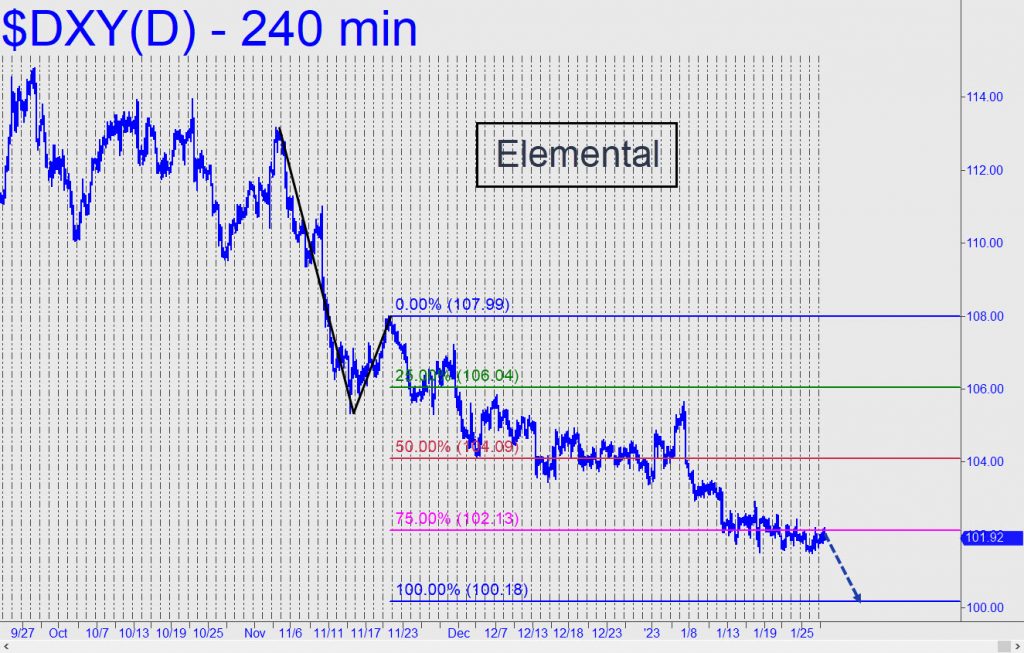 I’ve simplified the outlook with a single target at 100.18, stripping out another at 101.03 that is likely to be just a weigh station. A fall to ‘par’, if not lower, seems fated. Even if the downtrend has seemed relentless and interminable, it would amount to a relatively moderate 12.7%

Traders use Rick's Picks to slash risk
and boost their win rate:

If you are looking for trading recommendations and forecasts that are precise, detailed and easy
to follow, look no further.
$ 59 / month Annually discounts available
Learn More
Popular